Metrolinx is considering major changes to the Union Pearson Express, including the relocation of its platform at Union Station and the use of GO trains along the route.

The provincial transit agency confirmed to CP24 on Wednesday that they are looking into a number of changes to the service in anticipation of continued ridership growth that is expected to result in the line reaching its capacity by 2028.

According to a report in the Toronto Star, the contents of which were confirmed by Metrolinx, the changes being considered include the scrapping of the specialized diesel UP Express trains in favour of the same electrified GO trains that Metrolinx plans to use on the rest of the GO Transit network. Metrolinx initially purchased 18 of the specialized trains from a Japanese firm for $75 million U.S. in 2011.

That switch, in turn, would allow Metrolinx to provide service to Pearson International Airport on its Lakeshore East and Stouffville GO lines. The transit agency would also be able to double the number of trains serving the airport per hour from four to eight, though some trips would have additional stops that might delay the time it takes commuters to get to the airport. 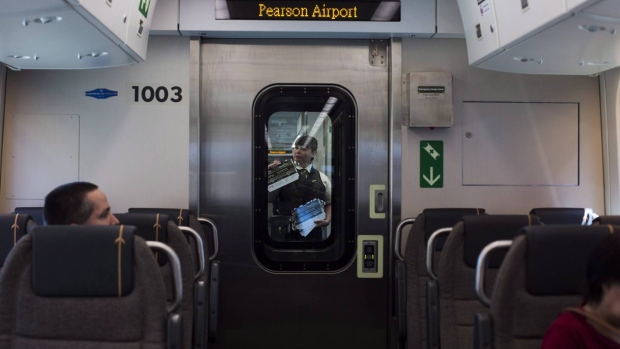 The changes, however, could ultimately mean a major overhaul of a service that was launched only four years ago at a cost of $456 million.

“We are planning for the expansion of our entire network and our vision is to implement the UP Express, as successful as it is, with the rest of our GO network so more people around the region will be able to get a fast, comfortable trip to the airport,” Metrolinx spokesperson Anne Marie Aikins told CP24 on Wednesday morning.

Union Station platform could be relocated

The Toronto Star report, which is based on a 36-page internal GO Transit planning document, reveals that Metrolinx is considering operating the Union Pearson Express as a “merged service” with GO Transit, representing a significant departure from the bells and whistle service initially conceived by the Liberal government. That service was based on the use of special trains equipped with Wi-Fi that are staffed by customer service representatives in retro-inspired uniforms.

The Toronto Star report also reveals that Metrolinx has drawn up plans to relocate the Union Pearson Express platform in order to accommodate increase traffic that is expected at Union Station as part of a planned increase in GO train frequency that will coincide with the introduction of electrified trains starting in 2025. The document says that doing so will require the construction of a new pedestrian bridge and associated infrastructure at a cost of at least $77.4 million.

It is unclear what the total cost of the other changes being considered would be.

Speaking with CP24 at Union Station, the NDP’s transit critic Jessica Bell said that she is pleased with the fact that Metrolinx is considering adding larger, electrified trains along the route but she said that it is unfortunate that tens millions of dollars will likely have to be spent on a service that only launched four years ago.

“It was a missed opportunity,” she said. “The UP express is in some ways a victim of its own success. But we knew that it would be a very popular train line and we knew that it would reach capacity very quickly and it has and now we need bigger trains. We should have realized that before but it is good that they are moving in the right direction now.”

Ridership on the Union Pearson Express was lower than expected when it first began service in June, 2015 but grew exponentially in the wake of the province slashing fares months after its launch. The service now carries about 3.5 million people per year.

Aikins told CP24 that while changes are now necessary, Metrolinx remains committed to a “fast, affordable link” to the airport in whatever form that may take.

“I don’t think we have to redo it. I think what we have to do is ensure that it has enough capacity to get us through the future,” she said. “The worst thing that we can do is to sit and enjoy how well it is doing and then 2028 comes and it is over capacity. So we are planning well in advance.