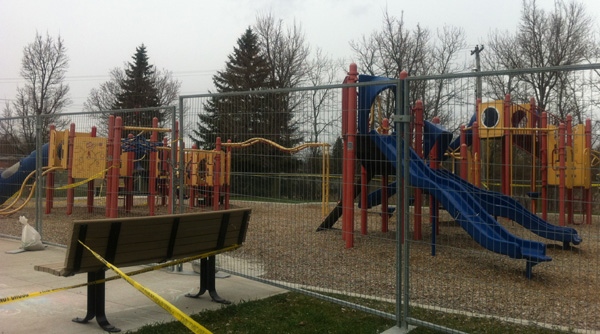 Mercury has been found near an elementary school in Pickering, two days after the hazardous substance was discovered on playground equipment.

Lucas notified the school and called police and fire services right away, according to Pickering fire prevention officer Steve Fowlds.

Lucas said finding mercury so close to a school is "disheartening".

"Thankfully (fire services and police) got it in time before the children came through the walkway," he said.

Police have cordoned off the walkway between Foxglove Avenue and Luna Court for their investigation.

On Monday, two girls found a vial containing the liquid next to a playground slide in Kinsmen Park, about 1.5 km from the walkway.

Some of the liquid was on the slide, and police determined the substance was mercury. Although the two girls had touched the liquid, no injuries have resulted from their exposure, according to Durham police.

"We're unsure whether it's connected, obviously it's more than just a coincidence at this time -- it is under investigation," he said.

Depending on the type of mercury, the liquid can be poisonous. Mercury can cause lung damage if inhaled, burning in the stomach and throat, and bloody diarrhea and vomiting.

Risi said the mercury only poses a risk if you ingest or are "severely exposed" to it.

"The HAZMAT team is here cleaning up the area, and I'm very confident it will be done properly and there shouldn't be any risk at all," he said.