TORONTO -- A 13 year-old violinist from Vaughan, Ont. will soon perform at one the most prestigious concert venues in the world—Carnegie Hall in New York City.

Lincoln Haggart-Ives has been chosen to perform in front of hundreds this June after his mother entered him in the American Protege Music Competition.

“I couldn’t believe it, I thought I was dreaming,” Lincoln Haggart-Ives said.

The competition is open to children and adults from around the world and participants are required to submit an audition video.

The boy’s mother learned about the competition from a neighbour and immediately submitted a video.

“We got world last week that he placed as one of the winners,” Marie Haggart said. “I’m very proud.” 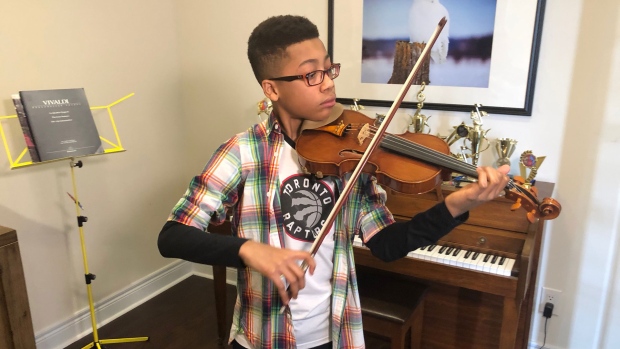 The 13-year-old will be performing one of his favourite pieces, Csardas by Italian composer Vittorio Monti, which was composed in 1904.

“I really like the piece because there are different parts that express different emotions,” he said.

Lincoln Haggart-Ives started playing the violin a month before his fourth birthday.

“We let him listen to all types of music when he was a baby and I think it just got him going. He’s a natural,” his mother said.

He practices about an hour to an hour and a half every day. Over the past decade, he’s won several awards.

“I enjoy learning new pieces and branching out and getting to explore different types of music,” he said.

Performing at Carnegie Hall is something many musicians dream of.

“It shows that hard work, perseverance and dedication pays off,” Maria Haggart said.

Lincoln Haggart-Ives is proud of this accomplishment and adds he has even bigger aspirations.

“I would like to perform with the Toronto Symphony Orchestra or the national orchestra.”