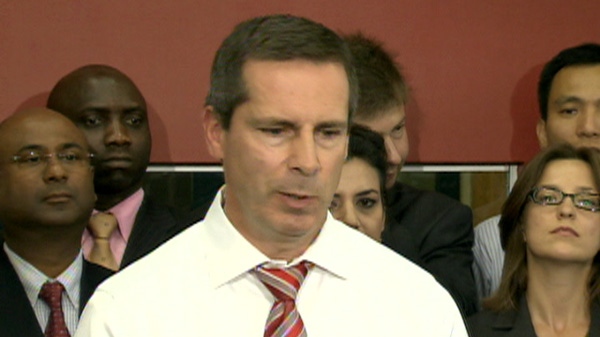 Ontario's Premier Dalton McGuinty speaks to the media in Toronto on Wednesday, July 27, 2011.

Ontario's Premier Dalton McGuinty is calling for Canada’s largest province to have greater power over immigration.

"B.C. has more power over immigration than in Ontario. We're just looking for the same fairness so we can do a better job for our immigrants," the premier said via Twitter on Wednesday.

During a visit to ACCES Employment Services in Toronto, which helps train immigrants, the premier noted that about 100,000 immigrants arrive in Ontario each per year, the most of any Canadian province.

Citizenship and Immigration Minister Dr. Eric Hoskins added the government is moving to make it easier for newcomers to find work in their professions.

The government announced in a news release that it would boost efforts to help internationally trained professionals practise in their professions sooner.

For example, doctors who are practice-ready will not have to do a residency.

The government also plans to have its fairness commissioner work with governments, professional regulatory bodies and others to reduce unnecessary barriers to entry while expanding opportunities for medical and other professionals.

The Office of the Fairness Commissioner is an independent government agency that oversees the licensing bodies of 40 Ontario professions.

According to a government news release, immigration accounts for 47 per cent of Ontario's workforce.

The province's finance ministry projects that immigration will account for all net growth in Ontario's working-age population by 2014.

The government cited a 2010 Statistics Canada study that found only 24 per cent of internationally trained persons work in their field, compared to 62 per cent of individuals with Canadian training.

The government said the most common barriers facing new Canadians include:

The government outlined a number of ways it is attempting to aid new Canadians. Those include Global Experience Ontario, which provides information and resources on professional licensing, and HealthForceOntario. That body is specifically aimed at internationally trained health professionals.

Since 2003, the government said more than 40,000 foreign-trained individuals obtained their licenses in Ontario and gained work in their fields.

McGuinty's Liberals took power in 2003. Ontario's voters go to the polls on Oct. 6.