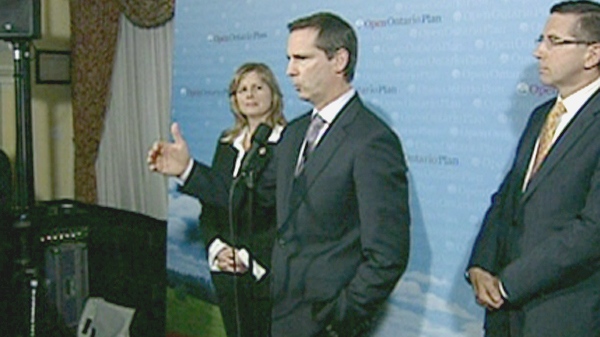 TORONTO - Premier Dalton McGuinty is expressing frustration with critics who are still demanding the provincial portion of the HST be removed from electricity bills.

Niagara Falls Liberal backbencher Kim Craitor has broken ranks with his government to say he doesn't agree with having the HST on hydro.

Eliminating the eight per cent provincial portion of the HST from hydro bills has also been a key demand of the New Democrats since the harmonized sales tax was introduced last July.

The government introduced a 10 per cent rebate on electricity bills Jan. 1, which McGuinty notes is a bigger break for ratepayers than removing the eight per cent portion of the HST from hydro.

The premier says he doesn't understand why critics are complaining when the government is giving rebates that amount to two points better than removing the HST.

McGuinty delivered a 30-minute campaign-style speech on the economy to the Hamilton Rotary Club today, a virtual repeat of the same address and slide show he delivered Wednesday in Kitchener.

"The show is coming to your community."