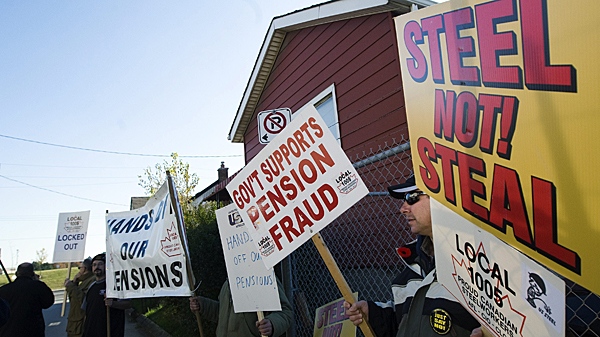 Hamilton local 1005 United Steelworkers protest as they wait for Ontario Premier Dalton McGuinty to arrive before McGuinty speaks to staff and the media at Joe NG Engineering Ltd. on Tuesday, November 9, 2010. (THE CANADIAN PRESS/Nathan Denette)

TORONTO - A prolonged lockout of 900 U.S. Steel workers in Hamilton isn't in anyone's best interests, Premier Dalton McGuinty said Tuesday after avoiding a meeting with some of the workers during a visit to the steel city.

The workers at the former Stelco Hilton Works were locked out Sunday night after refusing to agree to company demands for major changes in their pension plan.

"If there's anything at all that we can do to bring those sides together, keep them together and help them find a resolution, we're more than prepared and eager to do that," said McGuinty.

The government can't force the company and union to come together and negotiate a settlement, added McGuinty.

"What we can do is extend the invitation, provide a venue, put in place a mediator," he said. "But I would appeal to both sides right now ... urge them, encourage them, to come back to the table."

The New Democrats said McGuinty can and should be doing a lot more to help the U.S. Steel workers.

"We need a premier in this province who is actually prepared to roll up his sleeves and get involved as opposed to washing his hands of the serious issues in Hamilton around jobs," said NDP Leader Andrea Horwath. "It's time the premier starts getting involved."

The premier blamed his security detail for taking him in the back way to a Hamilton factory to avoid about 20 locked out U.S. Steel workers outside, who were carrying signs that read: "Hands Off Our Pensions" and "Government Supports Pension Fraud".

"I don't make those decisions," McGuinty told reporters. "My security does."

The workers called McGuinty "gutless" and chanted "shame" after learning the premier had avoided them while in Hamilton.

The United Steelworkers union said the workers were there to let McGuinty know they're worried about their pensions.

"McGuinty's jurisdiction is definitely pensions and we want him to make sure that U.S. Steel doesn't pull some scam, which a lot of companies do, to try and get out of their pension obligations," said Local 1005 President Rolf Gerstenberger.

"U.S. Steel would love to have Hamilton Hilton works without 9,000 pensioners. Then it would be a jewel in their crown."

U.S. Steel is insisting unionized workers vote on a "final" contract offer that demands a basket of employee concessions.

But Gerstenberger has refused to take the offer to the membership, saying it would amount to having the current 900 members change the contract for 9,000 past employees -- the retirees.

Among other things, the Pittsburgh-based company wants the existing defined benefit pension plan closed to new employees and replaced with a defined contribution plan. It also wants an end to the indexing of pension payments for current retirees.

Pension indexing ensures that monthly payments are in line with cost of living increases and inflation.

Gerstenberger said workers are frustrated because when U.S. Steel bought the former Stelco for $1 billion in 2007, the company told the government it would be able to meet pension obligations.

The plans are currently about $1.2 billion short of what would be needed to cover all their obligations.

"Unfortunately that's what these companies do, try to get out of their pension obligations," Gerstenberger said while waiting for McGuinty.

"So we're bringing this up now rather than waiting until the scam happens and everyone says: 'Oh my God, how did this happen?"'

The last strike at the Hamilton steel plant was 20 years ago, when it was owned by Stelco. But the steel industry has undergone massive changes since then and unions have lost a lot of their leverage as the industry has become more global.

At least one longtime industry watcher has said the steelworkers should brace for a long winter on the picket lines unless they're willing to accept the global steel giant's concessions.