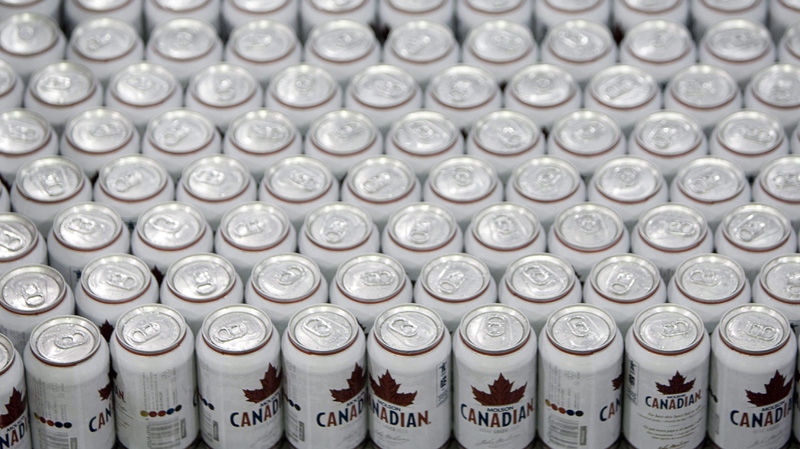 Cans of Molson Canadian are seen on the can line at Molson Breweries in Vancouver, Tuesday, Jan. 26, 2010.

TORONTO - A swath of southern Ontario will see road closures, power outages, downed cable lines and displaced traffic lights over four nights starting Friday -- all in the name of beer.

Massive vats that can hold six million bottles of beer will be hauled from Hamilton Harbour, where they arrived from Germany, to a Molson Coors (TSX:TAP.A) facility near Pearson International Airport in Toronto.

The beer vats are huge -- 45 metres long, eight metres high and more than seven metres wide -- and so is the effort to get them from Point A to Point B.

Challenger Motor Freight Inc. has worked with 70 different organizations in planning the route to avoid overpasses, co-ordinate with several police forces to close intersections, raise or cut hydro and cable wires to get the vats through, steer trucks by remote control through tight areas and remove metal poles then weld them back in place.

"It's been a logistical nightmare," said Challenger spokeswoman Sarah Sheehan.

"It has presented a lot of challenges, but the people who work in special commodities, that's what they're all about," she said of the team in place to organize the effort.

It will be the one of the largest moves ever in Ontario, she said.

"It does look like kind of a hodge-podge of how the roads were pieced together that we took, but every area is thought out in great detail," Sheehan said.

The beer vats, which resemble jet engines, have been loaded onto six giant flatbed trailers to be hauled by transport trucks.

They leave Hamilton on Friday night and wind their way through Burlington, Halton Region, Oakville, Milton, Peel Region, Mississauga, Brampton and York Region before ending up in Toronto on Tuesday morning.

The convoy will travel between 9 p.m. and 6 a.m. to minimize disruption to local residents and businesses, Sheehan said.

The six transport trucks are part of a 40-vehicle convoy to escort the vats. It will stretch more than one kilometre long, and will often be travelling at walking speed. During the day the convoy will park along the side of the road.

Twenty of those vehicles will be police cruisers, though more police officers will close down roads as the convoy approaches intersections, Sheehan said.

Because of the height of the booze-bound cargo about 1,614 service wires will be raised or otherwise manoeuvred to ready the route for the convoy, and others still will have to be cut.

Sheehan said power, phone and cable outages are expected to last about half an hour. The convoy will stop and wait until all wires are reconnected to proceed.

Utility vehicles will also make up the convoy, as will a mechanic, a welder to reattach the approximately 250 traffic lights that are expected to be moved for the trucks to get through, and a food truck.

Just turning some corners, or around light standards, is a huge production for the convoy. The trailers have remote controls on the back so it can be steered from behind, Sheehan said. In tricky spots one person will walk behind the trailer with the remote control and steer it, while remaining in close communication with the driver.

Details about the beer convoy's route can be found on Challenger's website at: www.challenger.com/molsoncoors.