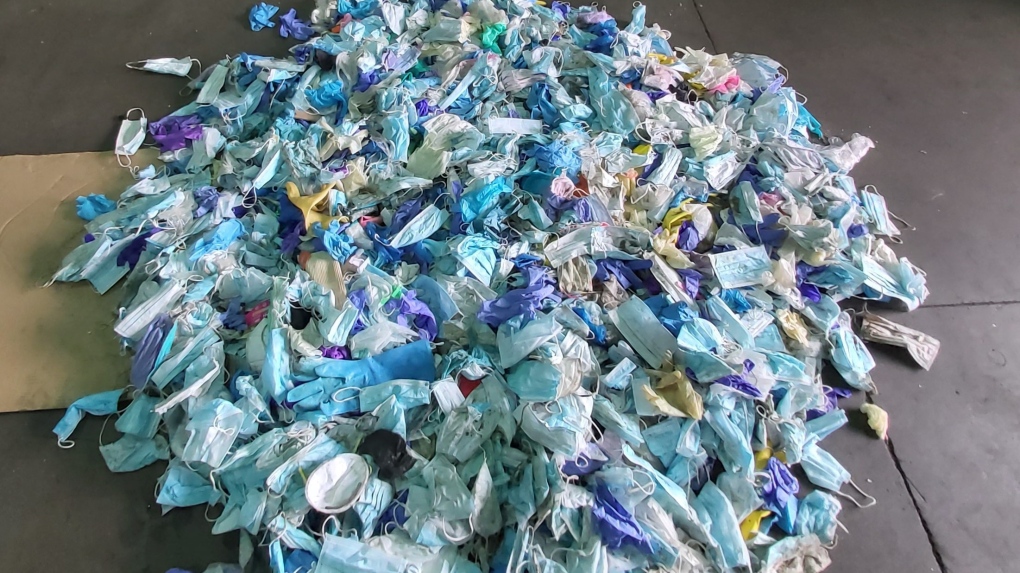 Collected gloves and masks are shown in this undated handout photo. Several cities are urging residents to throw their disposable masks, gloves and wipes in the garbage, not the recycling bin. York Region, which includes Markham, Richmond Hill and Vaughan, says residents have increasingly been putting those items in the recycling or the green bin since the COVID-19 pandemic hit. THE CANADIAN PRESS/HO, Regional Municipality of York *MANDATORY CREDIT*

TORONTO -- Several Ontario cities are reminding residents to throw their disposable masks, gloves and wipes in the garbage, not the recycling bin.

York Region -- which includes Markham, Richmond Hill and Vaughan -- said residents have increasingly been putting those items in their recycling or green bins since the COVID-19 pandemic hit.

The municipality said waste management staff have been finding more than 120,000 masks and gloves at their recycling sorting facility each month.

It said that could put frontline workers at a higher risk of getting and spreading the novel coronavirus.

"They're being exposed to these materials. Ultimately, we want to protect the health and safety of those workers," said Laura McDowell, director of York Region's environmental promotion and protection department.

McDowell said such items, which are now being used widely, contaminate batches of recycling that are sold to provide revenue for the region.

Starting Monday, York Region said waste workers will not empty blue bins with those items and will place a warning sticker on them.

Nearby Peel Region, which includes Mississauga, Brampton and Caledon, also urged residents to put such items in the garbage.

"To help keep everyone safe, we encourage residents to double-bag personal protective equipment, including masks, before disposing of it in the garbage," said Erwin Pascual, Peel Region's waste program planning manager.

"These items do not belong in recycling."

Meanwhile, the City of Toronto has been asking residents since March to put tissues and paper towels in the garbage instead of the green bin, and says masks and gloves have always belonged in the garbage.

Toronto said the city has communicated about proper disposal of masks and gloves through their website and social media since the beginning of the pandemic.

It adds that audits show an increase in the proportion of personal protective equipment in the recycling, from 0.06 per cent in June to 0.63 per cent in September.

Both Toronto and Peel said they've seen an increase in masks and gloves littering outdoor spaces and are urging people to place those items in the trash.

This report by The Canadian Press was first published Oct. 2, 2020.