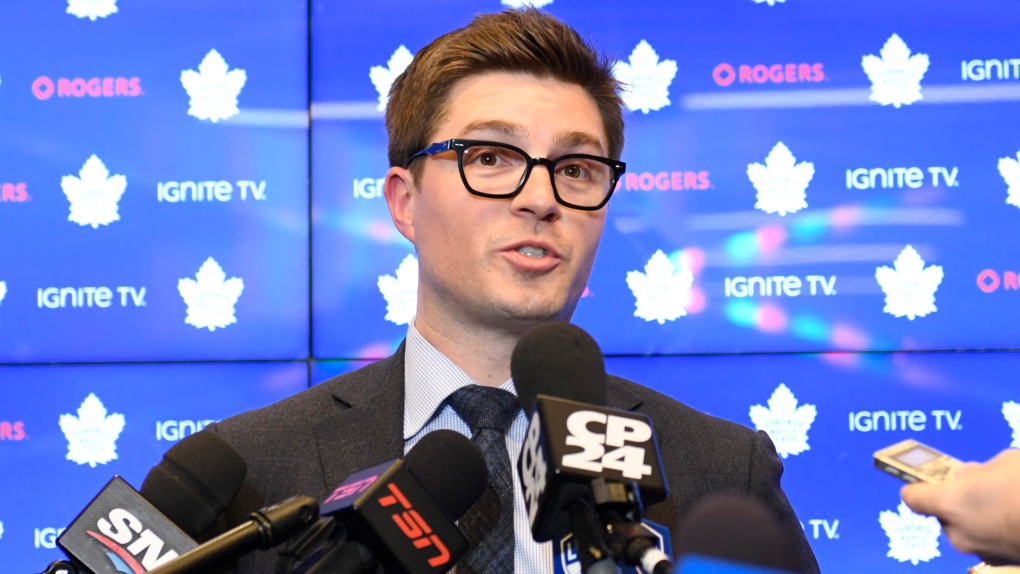 TORONTO -- Kyle Dubas wants to see more diversity in hockey and he's starting with the front office of the Toronto Maple Leafs.

Dubas spoke about needing a wider range of voices in hockey on Thursday night at the MLSE Foundation's speaker series. After a 45-minute panel, audience members were given the opportunity to ask Dubas and the other panellists questions and a university student asked about increasing diversity in sports.

"I think that other sports have done a far better job than hockey has in that regard," said Dubas, after citing a recent media report about the lack of diversity in hockey. "What I would say is that I know that our team was at the top of the list with about 16 per cent of our front office staff being women."

Toronto FC general manager Ali Curtis and MLSE chief technology officer Humza Teherany were also on the panel moderated by TSN's Lindsay Hamilton. More than 300 people were in attendance for the event at MLSE Launchpad, a facility in Toronto's downtown core owned by Maple Leafs Sports and Entertainment, that is dedicated to using sports to enrich the lives of youth.

Dubas went on to explain how, in his experience, hiring a diverse range of people was helpful to the Maple Leafs.

"Having more women and more general diversity on our staff, where people come from, their race, their sexual orientation, their gender, has been such a massive benefit to us and the way that we think," said Dubas. "The diversity of not only all of that, but also the diversity of thought and the way that they add various different levels of thinking to everything that we're doing.

Dubas's comments came at the end of a week where diversity in hockey had been hotly debated across Canada.

Sportsnet fired long-time hockey commentator Don Cherry on Monday following his comments on "Hockey Night in Canada," which many felt were critical of immigrants for not wearing poppies. Cherry used the phrase "you people," during his regular "Coach's Corner" segment on Saturday night but he has denied that he was singling out visible minorities.

On Tuesday, Jessica Allen, a correspondent on CTV's The Social, was debating Cherry's firing with her co-hosts when said she doesn't "worship at the altar of hockey" and found in her experience that those who did "all tended to be white boys who weren't, let's say, very nice."

She added that "they were not generally thoughtful, they were often bullies."

CTV issued an apology after outcry from hockey parents and Allen tweeted an apology on Thursday, less than an hour before Dubas's comments.

"I wish our organization represented the way that our city is, 100 per cent," said Dubas. "I wish we had much more diversity within our staff. But we're getting there, we're trying. I just think it's helped us so much in our thinking."

Dubas went on to say that despite his intentions, it's still a challenge to find a diverse range of people for the Maple Leafs to hire.

"The one issue that we have with the hockey team that I know the other teams (under the MLSE umbrella) don't have, because I think they are more diverse sports, they're more diverse entities, is that when we put out a job for application it's stunning to me the lack of diverse applicants we get," said Dubas. "It's almost predominantly white males and then white females."

Dubas then credited Curtis for doing a better job of hiring a broader range of people to Toronto FC's front office. Curtis, who is African-American, agreed with Dubas about the frustrating lack of diversity in the front offices of professional sports teams.

"Diversity is critical, it's important. To be honest with you, it's super personal for me as a black guy," said Curtis. "The tables I've sat at over the last six, seven years, I'm the only guy that looks like me at those tables. When you're part of a global sport you want everything to be global in nature."

Teherany and Hamilton also answered the question, noting the importance of diversity.

Teherany echoed Dubas and Curtis's comments about a diverse staff leading to broader ideas, which is critical in his role leading MLSE's technological innovations.

Hamilton spoke about the historic lack of female representation in sports broadcasting and the power of mentorship. She noted that as recently as a decade ago there had never been two female anchors on any sports show, whereas now it's a regular occurrence.

This report by The Canadian Press was first published Nov. 15, 2019.