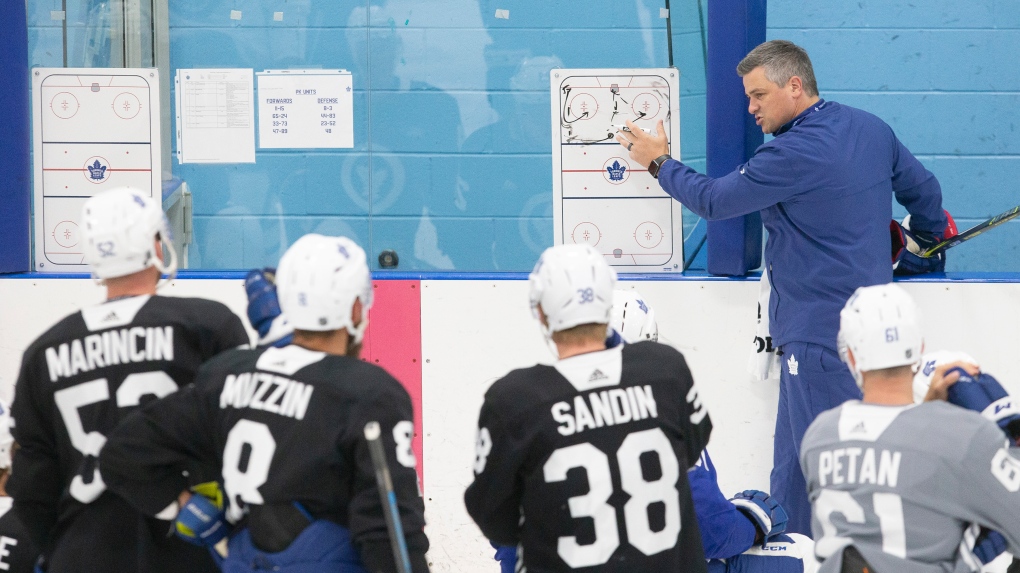 TORONTO -- There were times during Sheldon Keefe's first 47 games as head coach of the Toronto Maple Leafs where all he wanted to do was teach.

The 39-year-old quickly found out that's not really possible in the middle of a hectic NHL season.

Unlike the American Hockey League, where Keefe spent the previous spent five years, the games come fast. Coupled with travel and fatigue, there are few opportunities for real practices.

Promoted to the top job by the Leafs in the middle of a November road trip, and with just one morning skate at his disposal, Keefe briefly went over some key concepts.

He won that night in Arizona and 14 more times in his first 20 appearance behind an NHL bench, but when things started to go sideways -- Toronto dropped 10 of its next 17 outings -- he wasn't able to drill down on the defensive deficiencies plaguing his offensively-rich roster.

The COVID-19 pandemic that shuttered the NHL four months ago finally offered Keefe a chance to examine all aspects of the Leafs' setup. And the league's restart, which began in earnest this week with the opening of training camps, now gives him the opportunity to implement, tweak and build on that framework.

"It was very difficult," he said of trying to teach new philosophies in the weeks and months after replacing Mike Babcock. "You want to do so many things, and you have a plan to do so many different things. Then as the schedule comes at you, and you realize where the players' energy levels are and all those types of things, then you realize, 'Well, I really can't do this, I can't do that. Or if I introduced this today, there's not going to be the time to really build upon it.'

"That's what's been exciting about this as a time to really work at different things."

Keefe said he and his staff looked "very honestly" and where Toronto's game was at before the NHL closed up shop in mid-March.

There were things he liked. And some he didn't.

"There's no area of our game defensively that we were satisfied with," Keefe said. "We're not kidding ourselves here, we know that there's a lot of areas that we need to look at.

"Frankly, it's every area."

Keefe, who was 27-15-5 and had the Leafs in a playoff spot, said it's far to easy to pin the team's shoddy defensive play on its injury-hit blue-line corps.

"Our forwards have got to do more work and we've got to be a five-unit in how we defend in each zone," said Keefe, who finally has a healthy stable of defenceman in camp. "A lot of that work falls on the forwards."

Toronto, which is set to take on the Columbus Blue Jackets in the best-of-five qualifying round, sat second in the NHL with 237 goals for, but was also allowed the seventh-most at 222.

"From all three zones, everything that we're doing there, we're either tweaking it and making changes structurally to how we were playing or we're having more focused intensity and commitment to the habits and detail within it," Keefe said.

Leafs defenceman Tyson Barrie said getting time to learn before heading to the bubble just down the road in Toronto on July 26 ahead of the league's 24-team resumption of play Aug. 1 should pay dividends.

"Everyone's had a lot of time here through this whole pandemic to look at what we did well and the areas we needed improvement," Barrie said. "Our coaches, they spent a ton of time throughout this thing, and they know exactly how they want our team to play. And we're seeing that now.

"It's nice to have a little time to implement it."

Toronto centre Jason Spezza said the next two weeks are crucial in terms of putting what's on the whiteboard or video screen into action.

"We had an understanding of what he wanted, but this gives us the chance to work on it for a longer period of time," he said. "This is a great opportunity to get on the same page."

The offensively-gifted Barrie, who got a new lease on life under Keefe after struggling with Babcock behind the bench, likened his own play to how the Leafs need to approach the changes.

"We've been going through some stats and percentages, and we've got to be better defensively," Barrie said. "All our offensive numbers are there. For me, it's finding that line of jumping in and trying to create offence and making plays, and then also being responsible.

"My personal game fits well with what the team's going through. It's got to be a little bit more focused on shutting the other teams down."

Keefe expects nothing less. The crutch of not having time to soak up information is now gone.

"We fully expect our guys to be a lot better defensively," he said. "We're going to need to be, given what's at stake.

"But that's the greatest area of opportunity for us to grow."

This report by The Canadian Press was first published July 14, 2020.