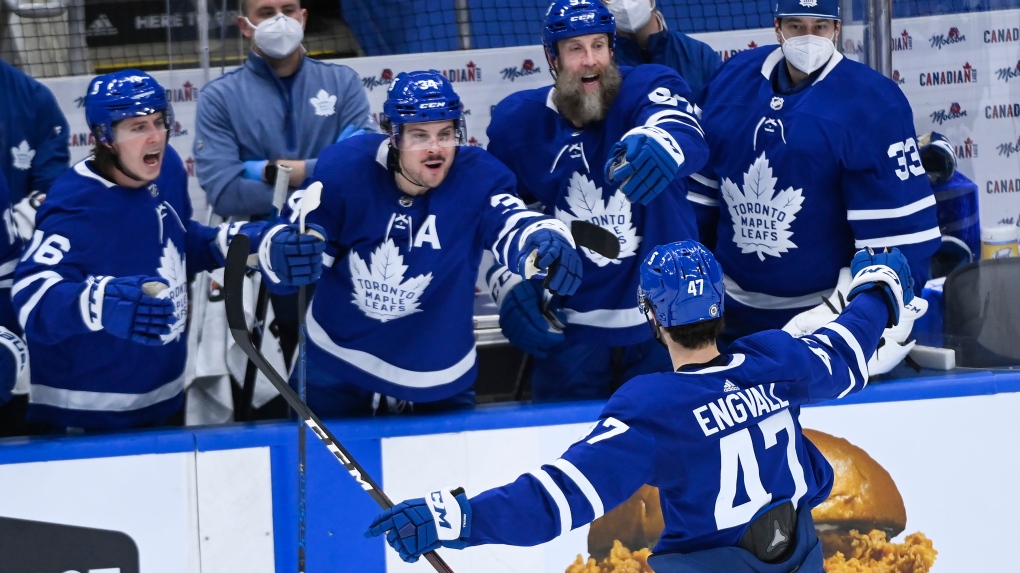 TORONTO -- The Maple Leafs have conquered the north in 2021.

Mitch Marner scored his 20th goal of the season Saturday as Toronto roared back from a 2-0 deficit to defeat the Montreal Canadiens 3-2 and clinch first place in the North Division.

“It's a good feeling,” Marner said. “We've got to make sure we just keep going with the pedal down.”

The Leafs secured their first division crown since 2000 - and only the franchise's fourth since 1938 - in the NHL's grinding 56-game pandemic season that's featured strict health protocols, daily testing for COVID-19 and empty arenas across the league's seven markets on the one-time-only Canadian circuit because of border restrictions.

“It's unbelievable,” said Toronto winger Wayne Simmonds, who signed with his hometown team in free agency as part of the club's moves to add more grit and experience. “For me and for the team, this is a great accomplishment.

“It's only getting started.”

William Nylander and Pierre Engvall also scored for Toronto (35-13-6), which got 21 saves from Jack Campbell.

“We've come a long way,” said Nylander, one of the few remaining players from the Leafs' last-place finish in 2015-16. “It's been a long process and a lot of hard work.

“This is just a stepping stone for where we want to go.”

The Leafs finished the regular season a dominant 7-2-1 against the Canadiens as the Original Six rivals look poised to meet in the playoffs for the first time since 1979.

“It would be a lot of fun,” Toronto defenceman Justin Holl said. “There's a little bit of animosity developing.

“We're prepared for anybody.”

Nick Suzuki and Brett Kulak replied for Montreal (24-21-9). Jake Allen made 23 saves as the visitors squandered a good start by allowing three goals in the second period.

“They had a pushback,” veteran winger Eric Staal said. “We talked about it. We knew it was a possibility.

“They were attacking us a little bit better and we weren't handling the pressure as well.”

The Canadiens, who had a chance to clinch the North's fourth and final playoff spot Saturday, host the Edmonton Oilers on Monday and Wednesday to close out their regular-season schedule. The Leafs, meanwhile, visit the Ottawa Senators on Wednesday and the Winnipeg Jets two nights later.

A Stanley Cup champion with the Carolina Hurricanes, Staal said if Toronto and Montreal do indeed meet in the first round, his team's 3-6-1 record in the season series will be irrelevant.

“When you get to the playoffs it's all new,” he said. “It's zeros across the board.”

Leafs sniper Auston Matthews, who leads the NHL with 40 goals and looks sure to claim his first Maurice (Rocket) Richard Trophy, failed to find the back of the net for the first time in six games Saturday, but won the faceoff that directly led to Marner's go-ahead effort late in the second period. The 23-year-old Matthews' personal five-game goal streak against Montreal also came to an end.

Down 2-0 following Suzuki's 13th goal early in the second on a shot Campbell will want back, the Leafs got on the board when Engvall wheeled out from behind Allen's net before firing home his sixth - and second in as many games - at 5:02.

After Campbell denied Josh Anderson on a Montreal power play, Toronto equalized at 13:36 when John Tavares redirected Jake Muzzin's pass in the slot right to Nylander, who swept home his 17th to extend his point streak to seven contests.

The Leafs then pushed ahead with 3:27 left in the period when Matthews beat Suzuki clean on an offensive zone draw, allowing Marner to wire his 20th in off Allen's crossbar in a blink of an eye. The 24-year-old winger now has three 20-goal seasons since making his NHL debut in 2016, and was one shy of the mark before the 2019-20 campaign was halted by COVID-19.

“I don't think he gets the credit he deserves,” Holl said of Marner's 67-point campaign. “He such a play-driver for our team.

Allen made a nice pad stop on Matthews from the slot eight minutes into the third to keep Montreal within one. Campbell, who improved to 17-2-2, followed that up a few minutes later with an excellent save of his own on 28-goal man Tyler Toffoli before the Leafs held on despite some tense moments late.

On the heels of falling behind 4-0 in the first period of Thursday's 5-2 loss in Toronto, the Canadiens had a much better start and opened the scoring 3:34 into Saturday on Kulak's second. The defenceman's double-clutched point shot glanced off Muzzin in front and past Campbell as the Canadiens grabbed a 1-0 lead for the first time in their last seven games.

Montreal made it 2-0 just 31 seconds into the second when Suzuki moved in on a 2-on-1 and fired a shot that went in off the inside of Campbell's blocker and dribbled over the line before Toronto exploded with three straight inside an empty Scotiabank Arena.

“It would have been pretty crazy,” Simmonds said when asked to imagine clinching the division in a building packed to the rafters. “The fan simulation noise isn't quite the same as having actual bodies in the seats and real people cheering for you.

“This is just the start.”

This report by The Canadian Press was first published May 8, 2021.