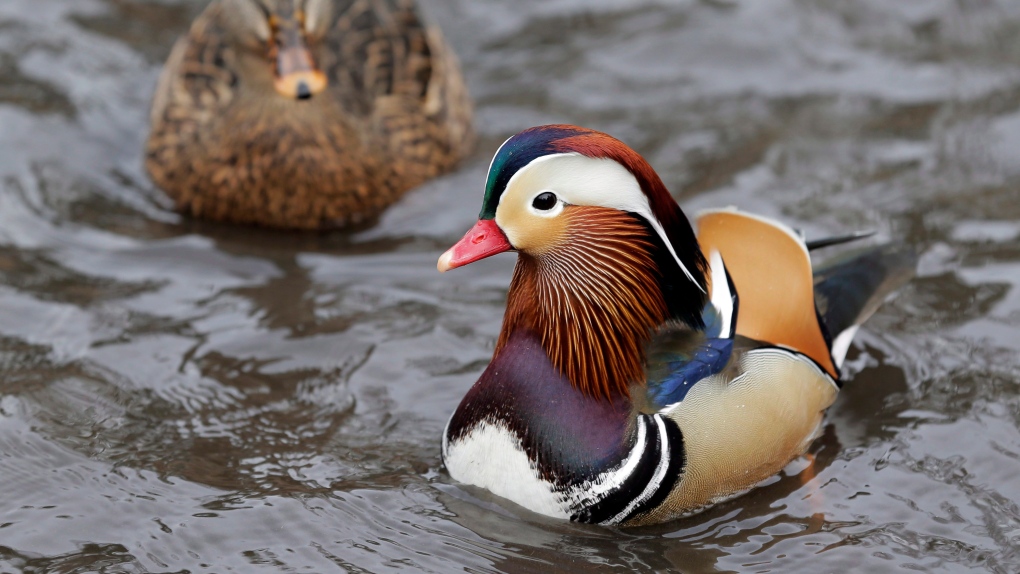 A Mandarin duck, right, swims in Central Park in New York, Wednesday, Dec. 5, 2018. In the weeks since it appeared in Central Park, the duck has become a celebrity. (AP Photo/Seth Wenig)

TORONTO -- A picturesque scene of a few dozen ducks navigating the icy sun-splashed river along Fairy Lake Park in Newmarket was interrupted by the sudden arrival of the southern Ontario town's newest celebrity.

"Eddie," a mandarin duck who recently escaped from his owner's nearby farm, plunged into the chilly waters to join some local mallards for a dip. His landing provided an instant boost to the local buzz that had been building after some recent sightings and social media posts.

Eddie didn't disappoint, fluttering his wings and showing off his dazzling colours to oohs and ahhs from youngsters and adults alike.

"I thought, 'Wow, that is a spectacular duck,"' said local resident Judie Rollins.

With a thin sheet of ice covering most of the river, a small section of flowing water by a park bridge proved to be an ideal spot for a frolic. Eddie even tried gingerly strutting on the ice before settling back in the water to the delight of onlookers.

Kids from the nearby toboggan hill noticed the commotion and ran over to catch a glimpse. Photographers stationed along the snow-packed riverbank vigorously snapped away. Families out for a stroll on the adjoining nature trail peered through the brush to get a view.

"It's a beautiful day and I needed to go for a little walk and get some exercise and some fresh air," said Rollins. "I was not expecting to see him at all. I was pleasantly surprised."

The duck's owner, Tracey Harpley, has been frequenting the area south of Newmarket's main drag hoping to catch Eddie. She has left some seed in a small pen nearby, hoping he'll remember his usual routine and settle inside.

"I'm glad people got to enjoy him," she said. "But now I think it's best he comes home."

Harpley, who volunteers for wildlife rehabilitation centres, cares for several small rescue animals. She said her 11-year-old daughter helps take care of their domestic ducks, who live on a large pond on their property.

Eddie took off one evening after being spooked by a flock of geese, Harpley said. He has been spotted at some other ponds but has yet to return.

"He's quite friendly, which makes him a little bit saucy," she said. "That's why he's kind of holding his own (out) there."

Primarily found in Asia and Europe, the mandarin duck has an exotic look with brilliant orange feathers at the back. White crescents by the eyes are split by an unusual slicked mohawk-like look featuring red, green and black tones.

Harpley plans to work with animal control officers over the coming days to try to get Eddie back in her possession.

This report by The Canadian Press was first published Jan. 10, 2021.