TORONTO -- A Toronto family is speaking out about what they call the "utter uselessness" of Canada's hotel quarantine program where their 74-year-old father believes he contracted a coronavirus variant of concern and then spread it to the rest of the family.

On March 2, Syed Shah landed at Pearson International Airport on a flight from Pakistan, where he had been staying to sort out a tenant issue with a property the North York family owns.

He was swabbed for a PCR test at the terminal while his son, Syed Haider, booked his father a stay at the Sheraton Hotel and Conference Centre on Dixon Road.

His father checked in, and like many people staying at quarantine hotels over the past few weeks, had issues.

“I can’t believe this is a Sheraton,” Haider recounts his father telling him. “They don’t have water – the hot water wasn’t working – the phones were down.”

The Wi-Fi coverage was spotty, and so instead of relying on WhatsApp to talk to family, his father used the hotel phone to make calls that never got through to his home, at a cost of $12.70.

There were other issues with cleanliness and the phone.

“He had quite a lot of visitors from the hotel itself because there were so many issues,” Haider said.

On the night of March 5, Shah’s airport test came back negative and officials cleared him to leave. His bill for the three night stay was $1546.56.

Haider picked him up and brought him home. Quarantine officials gave his father a do-it-yourself COVID-19 test kit, instructing him to swab himself and submit the swab on his 10th day of quarantine.

Everyone except Shah, who could not leave his home because of federal rules, went out and got tested.

All of them had contracted COVID-19. 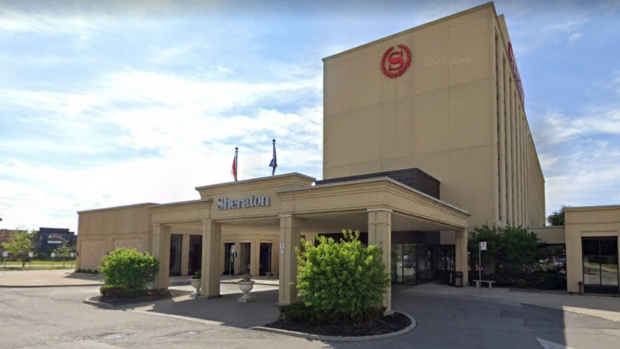 Still coughing on the phone, Haider, 32, said his symptoms started with a fever, a funny tickle in his throat and tiredness.

“I have the worst immune system,” he said.

His father, already living with only one kidney, fared worse.

His fever persisted for days. With everyone so sick, nobody could initially help him collect a specimen and submit for his test on the 10th day of quarantine, March 12.

He eventually needed to visit a hospital emergency room, where they scanned his chest, found no signs of the interstitial pneumonia found so often in COVID-19 patients and sent him home.

Toronto Public Health texted Haider about his result, and then someone called to collect their information, but Haider said they were not interested in the family’s belief that their father contracted COVID-19 at the quarantine hotel.

“There was no effort,” Haider said. “They just asked general questions, how many people are in the house, can you self isolate.”

Haider said he reached out to the hotel to notify them of his family’s situation, but the phone rang and rang with no response.

Their fears were confirmed on March 17 when the results of their father’s second test finally came back. He was positive, and the infection likely occurred some time after his first test, taken literally minutes before he was bused to the Sheraton Hotel and Conference Centre to begin his isolation period.

A Public Health Agency of Canada spokesperson said they were aware of Syed Shah’s negative test result, which allowed him to leave the hotel for home on March 5.

He was cleared to continue his quarantine period at home after he provided quarantine officers with a “suitable” plan to isolate at home.

They would not comment on his belief that he contracted COVID-19 while staying at the hotel and infected his whole family.

They also would not respond to questions about whether there was an ongoing infection or outbreak investigation at the hotel.

But Toronto Public Health did cite that in the case of Shah’s infection, even though it led to four other cases, it would not merit contact tracing follow-up under the city’s current guidelines.

Toronto Associate Chief Medical Officer of Health Dr. Vinita Dubey said that due to the “volume” of cases detected in Toronto each day, now amounting more than 1,000 per day, “(Toronto Public Health) is not pursuing all identified contacts of those cases in every instance.”

“We are focused on cases attached to high-risk settings and variants of concern. In those instances, we conduct full case management including full contact tracing.”

So it piqued Syed’s interest when TPH called him in late March to tell him that all five cases in his household screened positive for a variant of concern.

The most dominant variant of concern in Ontario is B.1.1.7, first detected in the United Kingdom it is about 45 per cent more transmissible than earlier strains of the virus circulating in Ontario.

All over the world, anecdotal reports have emerged of the B.1.1.7 variant spreading through vents and plumbing linking different units in the same building.

By the time the family was told their infections involved variants of concern, so much time had elapsed that contact tracing was not useful.

CP24 contacted Marriott, which owns the Sheraton hotel brand globally and was referred to the Sheraton Hotel and Conference Centre’s operator, Larco Hospitality.

All but one of CP24’s calls to Larco went unanswered. Once a woman who did not identify herself promised to provide a response, but none was ever received.

“I am pretty angry,” Haider said. “We didn’t break any rules, we did what we were supposed to do and even following the protocol, we got sick from the variant of concern.”

“We’re not one of those families who socialize – we take the pandemic very seriously.”

“We have this whole ritual with Lysol and spray,” Haider said of times when he returns home from going out.

Meanwhile, since late February, those who do not take the pandemic seriously are refusing to be tested or quarantine at Pearson, instead opting to accept a federal fine of $750.

Some of them document the ensuing confrontation on their social media pages.

Peel Regional Police, responsible for public safety in Pearson’s terminals, said last month they would not physically detain anyone who refuses to cooperate with the testing and isolation regime.

Issues with the quarantine program have even caught the attention of Toronto Mayor John Tory, who on CP24 this week called the program “cumbersome.”

“It is a program that some people are simply bypassing and taking a fine,” he said.

The whole thing makes Syed Haider and his family cynical.

“What if I brought my dad home and still got sick and not pay that $1,400. What’s the point of spending the money if we’re going to get sick anyways.”