Man who says he was beaten by cop, brother, accused of lying on the stand

OSHAWA, ONT. -- A young black man who testified he was beaten by an off-duty Toronto police officer and his brother three years ago was accused of perjury Wednesday as the pair's trial heard dramatically different accounts of the incident.

Defence lawyers representing Const. Michael Theriault and his brother Christian alleged Dafonte Miller lied on the stand about the events that unfolded in Whitby, Ont., in the early hours of Dec. 28, 2016.

In their closing submissions in an Oshawa, Ont., court, the lawyers argued Miller lied when he denied breaking into cars with his friends that night.

As a result, they argued, Miller's testimony is tainted and the Theriaults -- who have pleaded not guilty to aggravated assault and obstruction of justice -- should be acquitted.

To convict based on Miller's testimony "would be vindicating perjured testimony" and amount to a miscarriage of justice, argued Michael Lacy, who represents Michael Theriault.

Prosecutors, however, said the brothers were not justified in chasing the then- 19-year-old and beating him so badly that he lost his left eye regardless of whether or not he was breaking into cars at the time.

And if Miller did, in fact, lie about the events leading up to the encounter, that would be understandable given that he was the one handcuffed and arrested that night even as he lay bleeding on the ground, Crown attorney Linda Shin told the court.

"It's completely understandable... (he) would give the account he did," she said, adding many of the inconsistencies highlighted by the defence are "insignificant and explainable."

Miller's testimony on the key issues of the trial, including who wielded a pipe during the fight, was corroborated by other, independent witnesses, Shin argued.

Miller, now 22, testified before the judge-alone trial last fall, saying he was badly beaten with a pipe during the early morning encounter and didn't have an opportunity to fight back. He only recalled seeing Michael Theriault with the pipe. 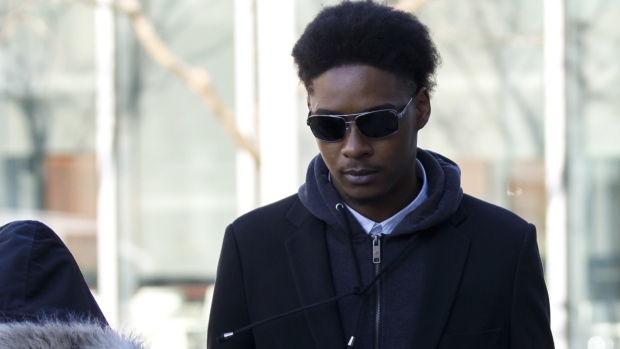 His lawyers have alleged outside court that race played a role in the attack.

Michael Theriault, who was last on the stand, acknowledged he hit Miller but said he did so only with his fist and out of self-defence.

He testified it was Miller who attacked him and his brother with a metal pipe or pole after the pair caught him and another young man stealing items from a truck belonging to the Theriaults' parents.

Theriault said he chased Miller into a dark area between two homes, his brother close behind, and bodychecked him. He testified that's when Miller hit him with the pipe, adding his brother was also struck in the head.

Theriault told the court he was not injured in the fight, but felt "general soreness." His brother initially told investigators he was sore, but reported more than a week later that he had since been diagnosed with a concussion.

Court heard Theriault never identified himself as a police officer, though he was later heard on a 911 call telling Miller that he was under arrest.

Lacy said Michael Theriault didn't need to identify himself as a police officer or state that he was conducting an arrest during the incident because "it was clear from the circumstances of the chase."

Given that Miller was caught in a vehicle, "it's obvious why he's being pursued," Lacy said.

The Crown has argued the brothers could also be found guilty of aggravated assault for carrying out an unlawful arrest or using excessive force during that arrest.

Prosecutor Peter Scrutton said Wednesday that based on Theriault's own version of events, there was nothing to indicate the officer was carrying out an arrest, which means any force used in the process was unnecessary and unjustified.

"He is not going there with arrest foremost in his mind...he's going out there to mete out some street justice," Scrutton said.

"Dafonte Miller is entitled to run away from street justice."

Miller has denied stealing from cars that night, telling the court he was out walking with two friends when the Theriaults started questioning them about why they were in the area. He said the brothers began chasing him when he and his friends walked away.

The judge is expected to give his ruling on April 9.

This report by The Canadian Press was first published Jan. 29, 2020.