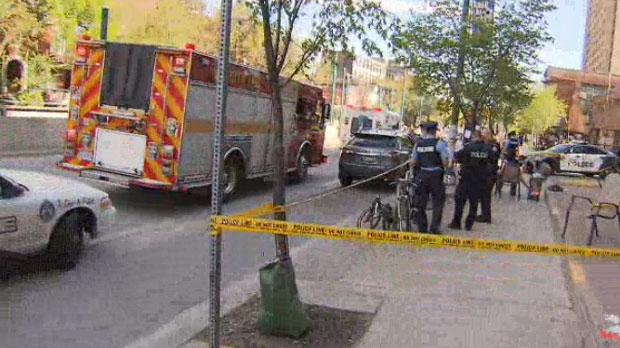 Emergency crews attend the scene of a stabbing near Spadina and Washington avenues on May 21, 2019.

A male victim has been transported to a trauma centre after a stabbing near city’s Harbord Village neighbourhood Tuesday afternoon.

Officers were called to the area of Spadina and Washington avenues, near Bloor Street, for reports of a stabbing sometime after 4 p.m.

According to police, two people reportedly intervened after they witnessed a woman being abused. Police said that at some point during the incident, a male was stabbed.

When officers arrived at the scene, they found a victim suffering from serious stab wounds. Paramedics said the victim was rushed to a trauma centre via emergency run for treatment.

Officers are searching the area for a suspect, who police have described as a black male believed to be about six-feet-tall who was last seen wearing white-washed jeans.