An Oakville, Ont. man, who won a lawsuit for a slip-and-fall accident, says he is shocked that he had to pay $55,000 for his lengthy hospital stay.

Guy McMurray said he was in excruciating pain for months after he slipped and fell on black ice in front of his workplace in 2013, smashing his kneecaps and severing his tendons.

He said the Ontario Health Insurance Plan (OHIP) asked him to hand over $55,000 to cover the cost of his stay and treatment in hospital.

“I didn’t know that OHIP was going to be involved in this process at all,” he told CTV News Toronto Wednesday.

“It did take me 80 days to recover in the hospital. I also had an allergic reaction and my heart stopped, and I couldn't work for a long time.” 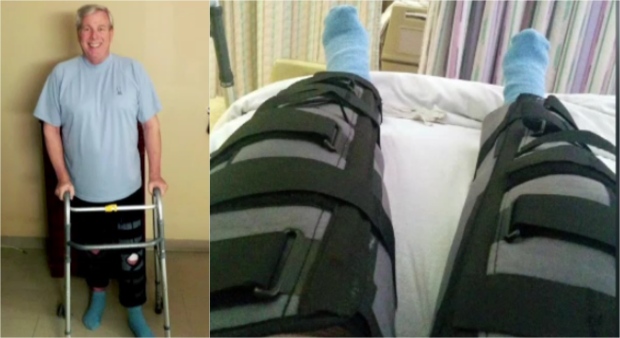 After paying off fees and a loan to help him pay for expenses while he wasn’t working, he was left with about $98,000, he said.

“By law, the money that was paid by OHIP, out of public funds, to provide health care services to the injured person is to be paid back to OHIP by the person who caused the injury,” a spokesperson said Wednesday.

McMurray said that, as a taxpayer, he feels he is being double charged for the care he received.

McMurray said he wants OHIP to return the money taken from him, and has asked the provincial government to review his case.

The Ontario Health Insurance Plan said that over the past two years it has recovered more than $30 million in public health costs from Ontario citizens who were hurt in personal injury accidents.