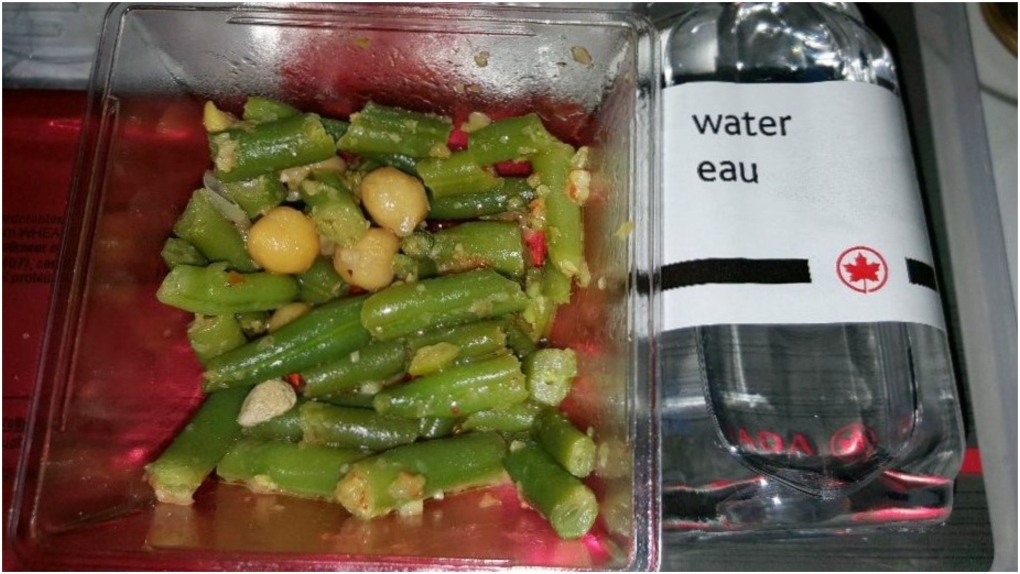 Ayman Amer said his wife found a rock in her in-flight meal on an Air Canada flight. (Ayman Amer)

TORONTO -- A Toronto man was left with a bad taste in his mouth after he said his wife discovered a rock in her in-flight meal on an Air Canada flight.

Ayman Amer is an engineer and said he regularly travels from Toronto to Doha, Qatar for work. On this particular trip last month, Amer said he travelled overseas with his wife, Cybele, and 10-year-old son.

On the return journey home, the Amers connected onto an Air Canada flight from Zurich to Toronto and said the cabin crew began distributing the in-flight meals.

“They gave us the food and then my wife opened the salad,” Ayman said, referring to the green bean salad with chickpeas and grains she had been given.

“All of a sudden my wife screamed ‘Ahh’ and removed what looked like a rock from her mouth.” 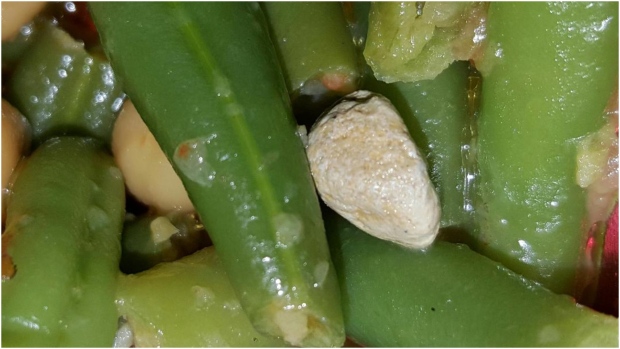 Ayman said he then flagged down a member of the cabin crew and notified her about what had happened.

“The stewardess grabbed the salad and left immediately,” Ayman said.

Ayman said he asked to have the salad back to take a picture of the meal, but claims the stewardess refused.

Ayman said he disagreed and asked for the supervisor to examine the “dried bean” under the light. Upon further inspection, Ayman said the supervisor returned and confirmed that the dried bean was in fact a rock.

“My wife could have choked or broken her tooth, not to mention my 10-year-old son,” Ayman said.

Despite the supervisor advising Ayman he would file a report on the incident and that Air Canada would contact him he never received a response.

In the days following, Ayman said he made several attempts to get in touch with Air Canada but initially didn’t hear back.

Eventually, Ayman said Air Canada did respond and offered him a $100 voucher to use for future trips with the company.

“I can’t believe how they handled it,” Ayman said. “It’s ridiculous. This has never happened on any other airline.”

In an email to Ayman, Air Canada apologized for the incident and said that the meals are prepared in a caterers' kitchens under "strict control".

"We understand how unexpected it would have been for her to find a stone while she was enjoying her salad. We are sorry for disappointing you," the email reads.

"We have shared your comments with our catering team for their internal review."

Ayman said the whole situation is a “disaster” and hopes that no other passengers have to go through a similar experience.

CTV News Toronto contacted Air Canada for comment but has not yet heard back.

'I would take the $100 and move on': Passenger rights advocate

Air passenger rights advocate Gabor Lukacs says that while the incident is 'unfortunate', he said Ayman should move on.

"Under the Montreal Convention, it is not clear if the passenger is owed anything (as long as they ultimately got their meal). So, I would take the $100 and move on if I were in the passenger's shoes."

Gabor went on to tell CTV News Toronto that the incident sounds like an honest mistake, which Air Canada does not stand to benefit from.

“There are many other things that Air Canada does that are wrong, they do so deliberately, and we should be focusing on those.”