Man found bound and gagged in Hornby, Ont. after abduction

Toronto-area police are searching for a vehicle and three suspects in an abduction case after a man was found bound and gagged in Hornby, Ont.

Officers said the man was found at approximately 7:30 a.m., in the area of Trafalgar Road and Highway 401 in Hornby, a community between Milton and Mississauga. The man was rushed to a nearby hospital to be examined by doctors, but they have not provided any information on his injuries.

Police said there was a language barrier, and they were looking for an interpreter before they could gather further information from the victim.

Few details have been provided, but Ontario Provincial Police said the man was abducted from Elizabeth Street in downtown Toronto. Officers could be seen outside of a condo building near Bay and Dundas Streets on Tuesday morning, but did not comment.

Residents of the condominium building say they heard a commotion around 6 p.m. Monday evening.

“I heard a door slamming, and then I heard a guy yelling, it must have been towards somebody, but I don’t know who,” one resident said to CTV’s Colin D’Mello.

Blood stains are seen splattered throughout the stairway of the condo building from floors 1 to 18. The blood stains led to an apartment that has been sealed and guarded by Toronto police.

A man who owns a business across the street from the condo told CTV Toronto that there were as many as six police cars lined up along Elizabeth Street on Monday night.

The Toronto Police Service is investigating the case, but OPP said they'd been told to be on the lookout for a pickup truck or a van that could be carrying three suspects. 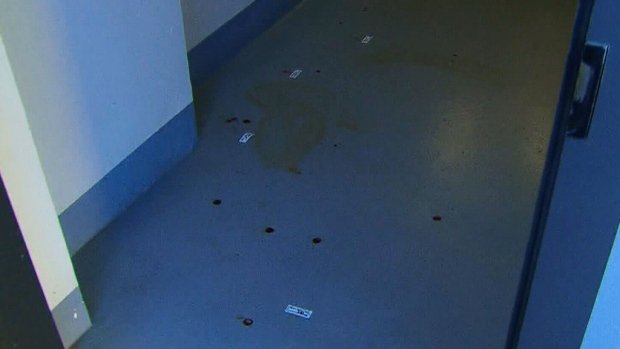