Man fighting for life after being shot by police in Mississauga

TORONTO -- A 28-year-old man is in hospital with life-threatening injuries after being shot by officers at a Mississauga townhouse complex.

Peel Regional Police said undercover officers were investigating a vehicle at Southampton Drive and Eglinton Avenue in connection with a drug investigation at around 7:30 p.m.

“When officers went to approach the vehicle, the vehicle drove at them,” Const. Sarah Patten told CP24 at the scene. “So the officer fired several shots at the driver of the vehicle, who was alone in the vehicle at the time, striking the driver.”

The vehicle then crashed into the garage of one of the homes,” Patten said. 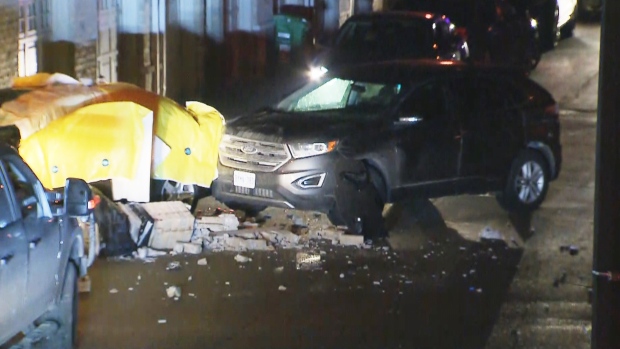 The driver did not return fire at the officers, she said.

The man was then rushed to hospital, police said. He was in life-threatening condition when transported, Peel Regional Paramedic Services said.

The province’s Special Investigations Unit, which investigates whenever police are involved in a death or serious injury, has been called in to investigate and has invoked their mandate.

No other injuries were reported in connection with the incident.

Residents of the townhouse complex where the shooting took place described tense moments.

Ashay Padhye told CTV News Toronto that he was in his unit with his girlfriend when he heard a commotion outside.

“We were sitting on the couch and we heard loud noises. We thought it sounded like gunfire, so we looked out the window and saw people with guns drawn. So then we went upstairs and turned off the lights and started watching from the window.”

A woman said she was cooking in her kitchen when she heard three to four gunshots.

Another man called the incident “sad.”

It’s not yet clear of the man who was shot lived in the complex.