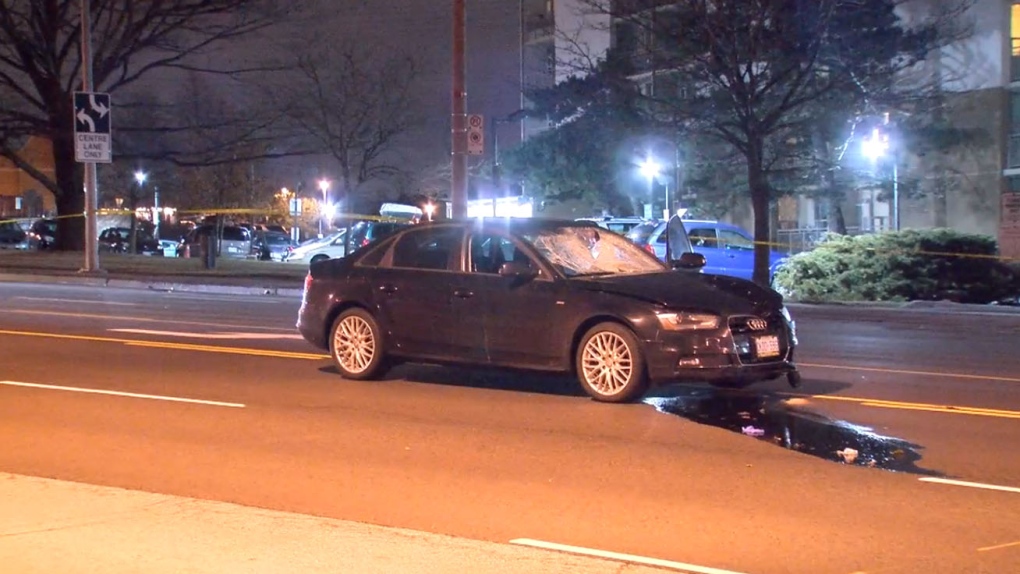 A vehicle that struck a pedestrian on Lawrence Avenue near McCowan Road early Sunday morning is shown. The pedestrian died while en route to hospital.

TORONTO -- A man is dead after he was struck by a vehicle while crossing the street in Scarborough early Sunday morning.

Police say that the victim was crossing Lawrence Avenue midblock near McCowan Road at around 1:30 a.m. when he was hit by a westbound vehicle.

The man was rushed to hospital but died while en route. The driver of the vehicle, meanwhile, remained on scene and is cooperating with the police investigation.

“He (the victim) was approximately 50 metres to the west of where we are standing right now so he was very close to the intersection when he was struck,” Insp. Jim Gotell told CP24 at the scene. “Toronto police urge all pedestrians when they are crossing the street to do so at a controlled intersection where there is a crosswalk and a light. Lawrence Avenue in this area is six lanes across and especially with somebody trying to cross the street at night it might be very difficult to see them.”

Gotell said that police conducted an extensive investigation at the scene, including a full reconstruction of the accident.

Lawrence Avenue was closed in both directions between Barrymore and McCowan roads but reopened shortly after 7 a.m.

Gotell said that it remains unclear where the victim was coming from or where he was headed.

“Really it is not known at this time what transpired prior to the accident,” he said.