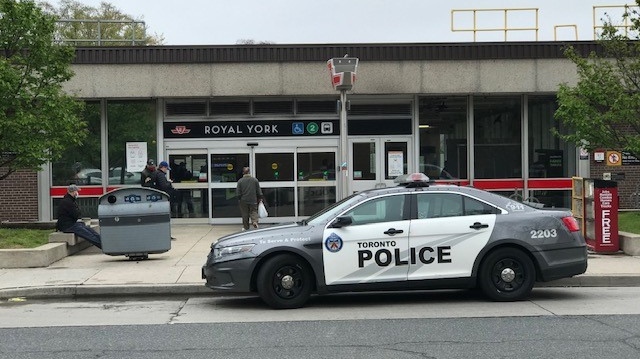 Toronto police respond to a stabbing at Royal York Station in Etobicoke Tuesday, May 4, 2021. (Ted Brooks)

TORONTO -- A 41-year-old man has been arrested in connection with a stabbing at Royal York Station that left another man with critical injuries.

Toronto police were called to the Line 2 station, in the area of Bloor Street and Royal York Road, just before 4 p.m. on May 4.

Police said the incident began at Islington Station, where two men got on a subway train and became involved in a verbal dispute.

It resulted in one of the men stabbing the other, police said. The suspect got off the train at Royal York subway station and fled the area.

When officers arrived, they located the victim on the subway platform suffering from multiple stab wounds. He was transported to a hospital in life-threatening condition.

After releasing security camera images of the suspect, police said on Saturday that they have arrested Kevin Andre Reynolds, of Toronto.

He has been charged with attempted murder, aggravated assault, assault with a weapon and possession of a weapon dangerous to public peace.

Reynolds is scheduled to appear in court on Monday.