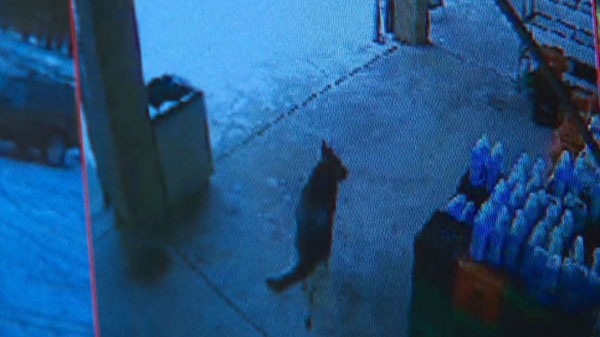 Police are seeking help from the public to identify the owner of a dog, seen in this video image, that allegedly attacked three people in Vaughan, Wednesday, Jan. 19, 2011.

A 41-year-old German Shepherd owner has been charged in connection with a series of brutal dog attacks that occurred last month outside of a convenience store in Vaughan, Ont.

Police said that the first attack occurred on Wednesday, Jan. 19 at around 8:40 a.m. when a man walked into a convenience store and left his 100-pound dog outside.

Video footage captured by security cameras at the time showed that the dog was not tied up and was left unsupervised.

Moments later, as the owner was inside, the dog attacked a 16-year-old girl who was walking nearby, investigators allege. The girl required medical attention after the dog bit her shoulder.

Minutes later, the dog attacked a 66-year-old man who was trying to walk into the store. The dog leapt at the man and bit his neck and arm, police say. He suffered serious bite injuries and needed 20 stitches.

Only five minutes after the second attack, the dog went after a 41-year-old woman who was trying to get inside the store. The woman managed to fend off the animal and was not seriously injured.

The dog was put down by Toronto Animal Services on Jan. 31 following a request from the owner. York Regional Police investigated the owner after getting a tip from a member of the public.

Vitalie Mazur, of North York, is facing three charges of failing to prevent a dog from attacking a person.

Mazur will appear in a Newmarket court on March 11 to face the charges.