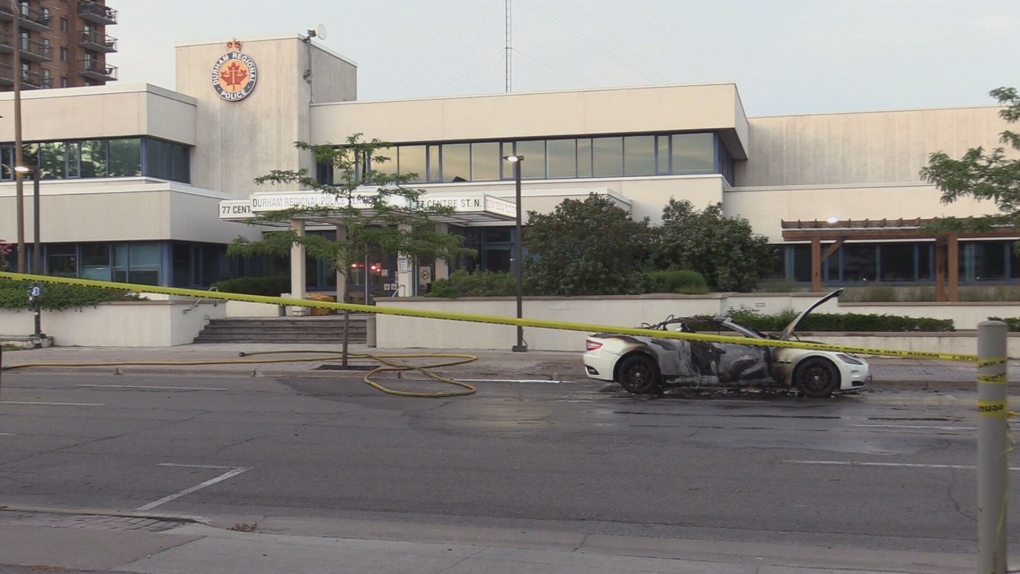 A car is seen heavily damaged following an explosion in front of a police station in Oshawa.

A 34-year-old man has been charged in connection with a car explosion in front of a police station in Oshawa on Thursday evening.

Durham police said officers at the Central East Division station in the area of Centre Street North and Bond Street West heard a loud bang just after 8 p.m. and found a vehicle in flames outside.

Witnesses told officers that they saw an individual throw an incendiary device into a parked car before it exploded, police said.

Shortly after, officers located the suspect and a short foot pursuit ensued.

No one was injured in the explosion, and no other buildings and vehicles were damaged.

Police said the explosive disposal unit attended the scene and cleared the area.

Police said he was held for a bail hearing.

It was the third incident in the Greater Toronto and Hamilton Area involving an incendiary explosive device. On June 22, a 19-year-old man was charged after allegedly detonating a homemade bomb at a mall in Newmarket.

Four days later, police said a man with an explosive device prompted a brief evacuation of a Hamilton neighbourhood. He was arrested and charged.

No injuries were reported in the two separate incidents.