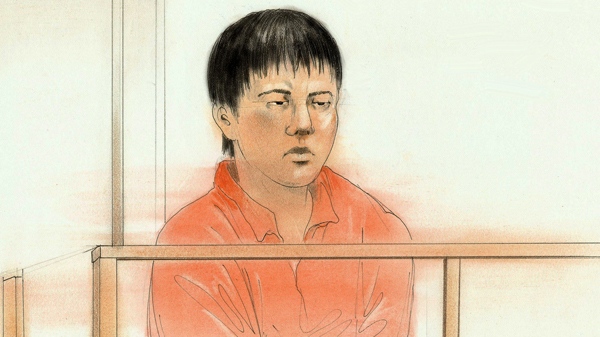 Zhou Fang is seen in this artist's rendition during court proceedings in Toronto, Friday, Dec. 3, 2010. (John Mantha for CTV News)

TORONTO - A man charged with killing his father with a crossbow in a Toronto library had been emotionally and physically abused by the man for several years, a lawyer alleges.

Zhou Fang, who went by the name Peter, and his mother Nora Fang, lived in fear of Si William Cheng and had obtained a restraining order against him, the woman's divorce lawyer Paul R. Krumeh said in an interview Saturday.

Cheng, 52, was fatally shot in the back by a bolt from a crossbow on Thursday afternoon at the Main Street branch of the Toronto library, which was crowded with parents and children.

His 24-year-old son, who resides in Ottawa, was arrested blocks away and charged with first-degree murder.

Zhou Fang appeared in court on Friday and was remanded in custody until his next court appearance on Wednesday.

Cheng had two domestic violence convictions involving his family. The mother and son went into hiding from Cheng and moved out of Toronto after the couple separated in 2002, Krumeh said in a telephone interview.

"The wife was extremely fearful of the husband," he said.

Krumeh who began divorce proceedings on behalf of Nora Fang before the case was turned over to an Ottawa lawyer, said there was a history of violence in the family.

Nora Fang had alleged that Cheng beat her and damaged her eyesight in one eye so badly she could no longer keep her job as a teacher in Toronto, he said.

That May 5, 2002 assault in which Cheng was convicted was witnessed by Zhou Fang, who was 15 at the time.

Citing court documents that according to Krumeh quote Nora Fang, Cheng had woken his wife and son up and ordered them to the kitchen the night of May 4, 2002, Krumeh said.

"'We were ordered to stand in front of him while he told us that he was the master of the family and required obedience from all of us'," Krumeh read Nora Fang's allegations from the documents.

Cheng woke up early the next morning, and apparently became incensed over a note his wife had left on the wall that Canada is a democratic society and everyone should be treated equally.

Cheng beat her on the head and pushed her elderly mother down when she tried to intervene, said Krumeh.

According to the court documents, Nora Fang blamed the abuse for her son having to repeat Grade 11 when he was 21-years-old and for an attempt to commit suicide, said Krumeh.

She also said in court documents that her son had trouble making friends, said Krumeh.

The couple, who married in 1985, had come to Canada from the city of Kunming in Yunnan province in southwestern China where they lived in an apartment.

Nora Fang had been a university lecturer there. Cheng, who had a chemical engineering background, had worked as a salesman at a chemical company.

But soon after their arrival in Vancouver in 1997, Nora Fang and her son stayed in a shelter after being abused by Cheng, said Krumeh.

But Cheng refused to leave, even though a court ordered the house be sold, and Fang and her son were too afraid to move back there, Krumeh said.

Tenants who were living in the house with Cheng were given an eviction order.