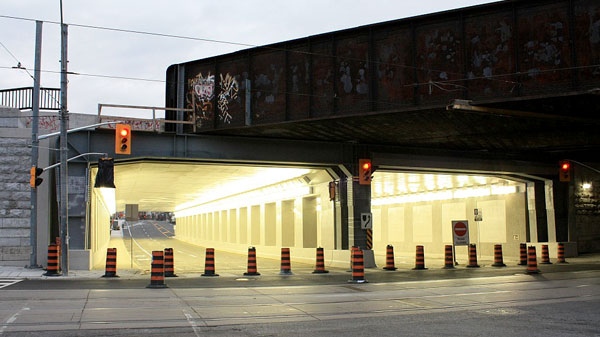 A long-maligned maligned detour along a major north-south street west of downtown has been eliminated officially eliminated with the opening of the Dufferin Street underpass.

The Dufferin Jog, a one-block detour along Dufferin Street just north Queen Street, has been slowing automobile and pedestrian traffic for decades.

A new 70-metre tunnel runs under a rail tunnel, connecting the major street as it runs from Lake Shore Boulevard all the way north to Wilson Avenue, above Highway 401. It cost $40 million to build and came in on budget. However, it was supposed to

"In addition to improving traffic flow, the realignment of Dufferin Street helps to link this community together and provides much needed infrastructure improvements and benefits to the local economy," he said in a statement.

Until now, traffic along Dufferin Street has been forced to detour one block east to avoid a rail line running above the Dufferin and Queen intersection.

The hiccup has existed since the Queen underpass was built in the 1880s. The Dufferin Jog Elimination project began with public meetings in 1991.

The project included the construction of an amphitheatre on the west side and a public art installation along the tunnel walls.

Dufferin Street has been listed as one of Ontario's worst roads, with a cluster of potholes found near the underpass. CAA spokeswoman Faye Lyons has said plans to fill the holes have been delayed by the ongoing underpass construction.