A male student was transported to the hospital with serious injuries after a shooting in the city’s west end.

The incident occurred near St. Clair Avenue West and Oakwood Avenue around 2:30 p.m.

When officers arrived at the scene, they found the victim “conscious and breathing.” He had sustained at least one gunshot wound, police said.

"Two males became involved in an altercation on the north side of St. Clair Avenue," Insp. Darren Alldrit told reporters on Friday.

"Both males ended up pulling out firearms and discharging them at each other. One of the males then fell to the ground."

"At some point, the male that fell to the ground, who suffered a gunshot wound, ran back on St. Clair and back to Oakwood Collegiate here, where he was seeking some refuge."

According to police, the victim sustained serious, but non-life-threatening injuries.

Toronto District School Board Spokesperson Shari Schwartz-Maltz confirmed that the victim was a student at Oakwood Collegiate and that the vice-principal administered first-aid to the victim.

"She [the vice-principal] was the one that tended to the wounds and she's pretty upset because they [sic] love kids," Schwartz-Maltz said speaking to reporters on Friday,

Schwartz-Maltz added that councillors attended the school Friday and will return on Monday to assist students and staff.

Oakwood Collegiate Institute was placed under a hold and secure order, police said, but that order has since been lifted.

The suspect is described by police as a black male, in his teens and dressed in dark clothing. 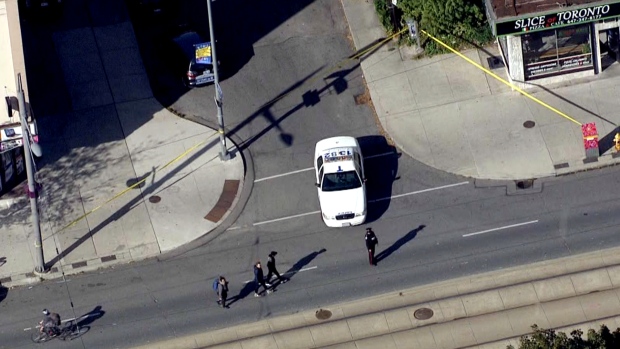