Male rushed to hospital after reported shooting in Scarborough 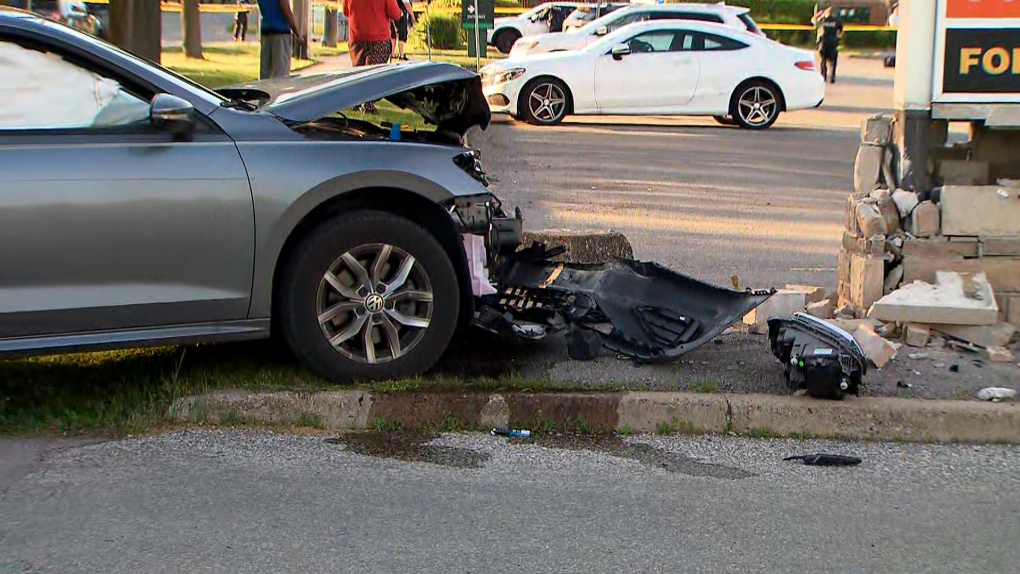 Police investigate the scene of a collision and shooting at Warden Avenue and Bridletowne Circle Monday June 1, 2020.

TORONTO -- A male victim is in hospital with life-threatening injuries after being pursued and shot multiple times in Scarborough’s L'Amoreaux neighbourhood.

Shortly before 7 p.m., a grey Volkswagen Jetta crashed into a sign board at a plaza at Warden Avenue and Bridletowne Circle.

According to Toronto police, that vehicle was being driven north on Warden Avenue when a white SUV pulled up alongside it and began shooting rounds at it.

The Jetta then crashed and its occupants fled.

“The white SUV then followed one of the victims through the lot of the plaza and continued to shoot at that victim. That victim received several gunshot wounds,” Insp. Darren Alldrit told CP24 at the scene.

He said the vehicle then pulled out of the lot and fled southbound on Warden Avenue. It’s not believed that the occupants of the SUV ever got out of the vehicle.

“We believe at this time – again it’s early in the investigation – but this is a targeted shooting it looks like,” Alldrit said.

He added that multiple rounds were fired and upward of 20 shell casings were found at the scene.

One male was transported to hospital from the area with possibly life-threatening injuries, Toronto Paramedic Services says.

According to reports from the scene, the victim described himself as being 17 years old.

There is no description of the possible suspects so far.

One man who lives in the area told CP24 that he heard what sounded like firecrackers when the gunfire erupted.

“I was in the park. I live behind and I heard what sounded like fire crackers – a lot of them in a row – and I thought that’s weird,” he said. “I thought it came from the park behind. I waited to see if there were any sirens after and there were.”

Alldrit said police are appealing to any possible witnesses who were in the area, particularly those who might have dashcam footage, to contact investigators.