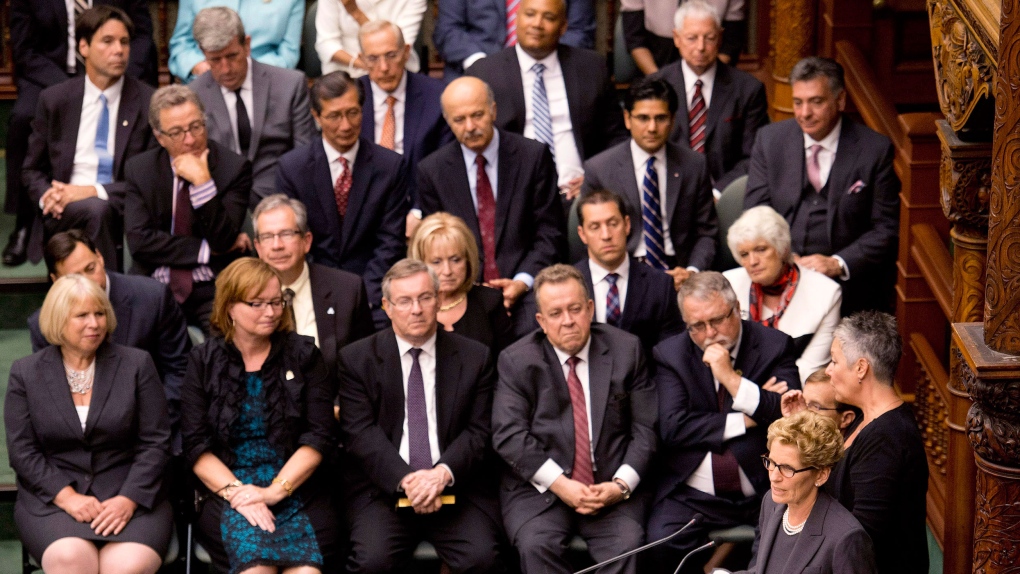 Kathleen Wynne, right, speaks in front of her newly-appointed cabinet after being officially sworn in as 25th Ontario Premier at Queen's Park in Toronto on Tuesday, June 24, 2014. (Nathan Denette / THE CANADIAN PRESS)

TORONTO -- Questions about the possible sale of public assets and a government loan to a charity to expand a medical research centre dominated the return of the Ontario legislature Monday.

Except for a brief post-election summer sitting in which the government passed its budget, the start of the fall session marked the beginning in earnest of Liberal majority reign.

The government has set up a special panel to look for ways to get maximum value out of the Liquor Control Board, Ontario Power Generation and Hydro One with a possible eye to bringing in private-sector investment that would be used to fund transit and infrastructure projects.

The panel, chaired by Ed Clark, president and CEO of TD Bank Group, is recommending all three remain in public hands, but that Hydro One should get out of the local distribution business.

Wynne responded to Wilson that the information in Clark's interim report, when it is released, will be available to everyone, including the auditor general.

"Ontarians are going to be left paying for the costs of hydro and the profits of private energy speculators," Horwath said. "When you privatize a public company, I call that privatizing. When you sell off public ownership, I call that a sell-off."

The NDP wants to require a public referendum before any government could sell the LCBO, OPG, Hydro One or Ontario Lottery and Gaming.

Wynne said there is a "role" for the private sector, but that the Crown corporations should remain public assets.

"(Clark) has also said that there are changes that can be made that will benefit the customers, will benefit the ratepayers, and will also provide the best benefit to the people of Ontario, because we will be able to then invest in transportation infrastructure that is much needed across this province," Wynne said.

The Liberals are also facing demands from the opposition parties to release documentation surrounding a $224-million loan made years ago for the MaRS Phase 2 tower. MaRS and the developer have been unable to repay the loan and the province is now paying interest of up to $7.1 million a year on it until an agreement on the future of the new tower is finalized.

Opposition MPPs have been pressing the government in committees to make public whatever analysis or business case was done at the time in support of giving the loan.

Wynne said that Infrastructure Minister Brad Duguid was reviewing documents, but would not release any "commercially sensitive" information when the deal is not yet complete.

This session the government is looking to pass more than 20 bills that died when the spring election was called.

Wynne has said she is eager to get moving with her efforts to create an Ontario pension plan. The Liberals are also hoping to push through legislation including an infrastructure planning bill, a bill to index minimum wage to inflation and an accountability and transparency act, which would get MPPs to post expenses online and would make it an offence to destroy government records.