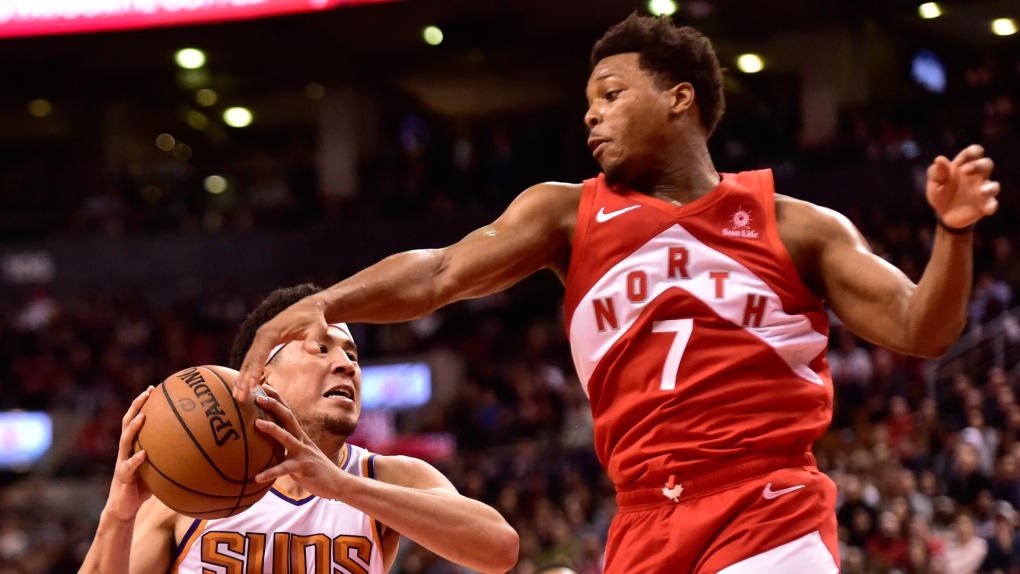 Toronto Raptors guard Kyle Lowry (7)gets a hand to the ball as Phoenix Suns guard Devin Booker (1) drives for the basket during second half NBA basketball action in Toronto on Thursday Jan. 17, 2019. THE CANADIAN PRESS/Frank Gunn

TORONTO -- After collecting his 5,000th career assist on the night, Kyle Lowry got the ball. But Pascal Siakam got the win.

With Kawhi Leonard resting for the second game of a back-to-back, Toronto coach Nick Nurse elected to put the ball in Siakam's hands with 13 seconds left in a 109-109 tie with the Phoenix Suns.

The six-foot nine forward from Cameroon paused before blowing past first Mikal Bridges and then Deandre Ayton for the winning layup with no time remaining.

"He made a great move and finished it off," Nurse said after the 111-109 victory Thursday.

"We call him P-Skills for a reason," added C.J. Miles. "He's got a lot of skills. There's a lot of things he can do with the basketball."

A smiling Siakam, who also goes by Spicy P, said he appreciated the fact that his team entrusted him with the ball with the game on the line.

"To be honest, I didn't know what I was going to do. I just had to make sure that I took the last shot," he said.

"It was 'Pascal get the ball and get some spice a little bit,"' Siakam, wearing a T-shirt that said Hot Stuff, added with a laugh.

Lowry had 16 points and eight assists. He and Serge Ibaka, who finished with 22 points, turned it on in the fourth quarter but the Suns refused to go away.

Just who got the game ball remains a mystery.

"I think Kyle stole it," said Siakam. "But that's cool. Kyle can have that."

There was a basketball in his locker, however.

After a Devin Booker three-pointer gave the Suns a 107-105 lead, Siakam sank two free throws to tie it with 1:16 remaining. A Raptors defensive stop and Ibaka hook shot made it 109-107 Toronto.

Kelly Oubre Jr., missed his shot but an Ibaka foul sent Bridges to the line with 13 seconds left. He made both.

A Toronto timeout set the stage for Siakam's heroics. He finished with 10 points and 12 rebounds.

Toronto (34-13) was without Leonard (rest), Jonas Valanciunas (thumb) and OG Anunoby (personal). They did not miss a thing of beauty but the matchup between the second and 27th-placed teams in the league proved to be far closer than expected.

Six Raptors finished in double figures as Toronto bounced back from a 117-108 loss in Boston on Wednesday.

That loss snapped the Raptors' five-game win streak. But they kept another run going as they notched their eighth straight win at home since losing a 104-99 decision to Milwaukee on Dec. 9.

It was also Toronto's sixth win in seven games, improving the Raptors' record to 7-2 in January.

After leading by as much as 16 in the second quarter, Toronto was outscored 29-20 in the third and went into the final quarter trailing 78-77. The Raptors shot 7-for-22 in the third.

Phoenix's Josh Jackson was ejected in the fourth quarter for a second technical. He had sparked the Suns offence with five points in the quarter, finishing with seven.

The second technical came with a flagrant foul, allowing Toronto to run its lead to 92-87. The Raps retained possession and Lowry sank a three-pointer to rub salt into the wound in a 9-0 run.

Lowry had originally been ruled out of the game for rest purposes but was pronounced fit to play before tipoff. Lowry, who only recently came back from a sore back, spent his time on the bench lying on his back rather than in a seat.

He came into the game needing six assists to reach 5,000 for his career. He collected No. 6 in the fourth quarter, feeding Ibaka for a bucket.

"I would have never thought I would have gotten there at the start of my career," said the 32-year-old Lowry, who is in his 13th NBA season. "I'll look back on this when I retire ... For now, it's a great day, a great team win for us."

Miles had been listed as questionable with a sore hip but was able to play. He finished with a season-high 13 points.

Toronto started Lowry, Fred VanVleet, Danny Green, Siakam and Ibaka, a lineup that had gone 4-0 this season. The Raptors have used 14 different starting lineups this season, compared to 12 all last season.

The Raptors have routinely sat Leonard, who scored 33 points against Boston, for one half of back-to-back games.

Toronto has not lost on consecutive days since Dec. 26-27, 2017 (at Dallas and Oklahoma City). Since then it has split nine back-to-back sets and swept nine.

The Raptors only have three more scheduled back-to-backs left, fewest in the NBA.

Patrick McCaw, signed a free agent Jan. 10, made his Raptors debut off the bench in the second quarter. He did not score in six minutes.

It was the Raptors' 12th annual Canadian Armed Forces Appreciation night with more than 300 members of the military and their families in attendance. A pre-game presentation recognized Lieut.-Gen. Jean-Marc Lanthier, commander of the Canadian Army.