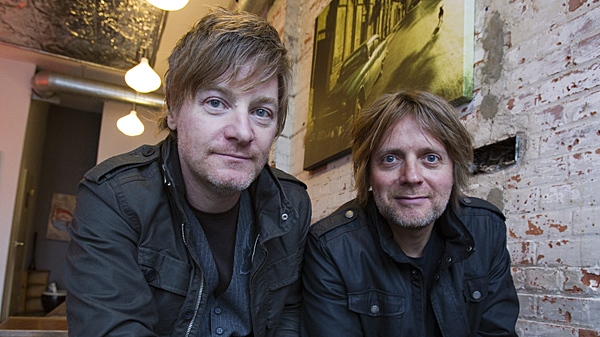 Ron Hawkings (left) and Stephen Stanley of Lowest of the Low in an interview with The Canadian Press in Toronto on Tuesday, November 16, 2010.(THE CANADIAN PRESS/Frank Gunn)

TORONTO - Founding Lowest of the Low member Stephen Stanley says that relations within the group were once so tempestuous that if they hadn't broken up, someone in the band might have died.

He says this over coffee at a hip cafe in Toronto, sitting next to the band's frontman, Ron Hawkins. At first, it seems like he's kidding, or exaggerating for effect. But he doesn't smile.

"It's not even really a joke," interjects Hawkins. "It was really bad."

Stanley continues: "It just got crazy. It got crazy. If we just put out our records ourselves and never got involved with anybody else, we might have lasted another year and a half. But the extra pressure of somebody every day telling you: 'No no, your instincts are wrong'; it just drove us nuts. We were always in a van. We did have some amazing times --"

"And some historic fights," Hawkins adds.

It seems somewhat surprising, then, that the band is reuniting for a pair of hometown shows in Toronto to celebrate the 20th anniversary (and re-release) of their influential 1991 debut, "Shakespeare My Butt."

After all, even the band's second attempt at a reunion -- which resulted in their third studio album, 2004's "Sordid Fiction" -- eventually ended in a split.

But watching Stanley and Hawkins banter back and forth now, it seems as though much of the ill will that at one point arguably prevented the Lowest of the Low from reaching their full potential has been safely sequestered in the distant past.

"The first time we broke up was quite horrible," Stanley said. "We were young and there was a lot of petulance and a lot of bottled up anger from everybody spending probably nine-tenths of the year together in a van. The second time we decided to put it to bed (in 2007), it was very organic. It was kind of like we thought we'd done what we could do with it, and we all wanted to do other stuff."

"Now, it's just kind of a pleasure to come back to."

The Lowest of the Low formed in 1991 out of the ashes of a group called Popular Front, which Stanley calls a "dismal failure."

But they learned a lesson from that first aborted group, realizing that they had to rehearse and play live shows relentlessly. When they began working on the songs that would eventually form "Shakespeare My Butt," the members of the band were in their mid-20s and Hawkins was experiencing a "pretty cathartic moment" in his life.

"Lots of amazing corners were being turned in my life personally," he recalls. "A very long relationship that I was in broke up as the band was starting to do more and more. So I had a romantic, cinematic sense all the time when I was walking around, and that sort of came together with looking at my city with new eyes, and then starting to write songs about my city.

"The songs for that record started to pour out that way."

The 17-song collection struck jangle pop with a jolt of punk energy, while the real star might have been Hawkins' hyper-literate lyrics, which incorporated winking humour, politics, melancholia and reams of references to specific corners of Toronto.

Though it took time, the record eventually became a hit thanks to fervent local radio support and the group's tireless touring.

The band eventually signed with A&M Records, and the record was re-released. But the group had found enough success independently by then that they felt they didn't necessarily need the help.

They began clashing with their new label almost immediately. After touring the country several times behind "Shakespeare My Butt," the band wanted to begin work on a sophomore record (which would eventually become 1994's "Hallucigenia"). The label, meanwhile, wanted the band to head back on the road first, to probe the few remaining corners of Canada they'd yet to visit.

The Lowest of the Low spurned other opportunities to claim a bigger audience. They turned down opening tours for both the Barenaked Ladies and Bryan Adams, both because Stanley says they weren't fans of those artists at the time and because they weren't keen on playing massive venues.

"We had no business plan, and the only plan we had was to hide the look of surprise on our face as all these things were happening," Hawkins said. "Because nobody was more shocked than us that it was going so fast."

Yet over the years, Hawkins and Stanley have developed a complicated relationship with the album that launched their careers.

In a slight documentary that comes bundled with the new re-issue, "Shakespeare My Butt" is described by the band as an "albatross and a gold medal."

Hawkins and Stanley have both pursued prolific solo careers in the decades since "Shakespeare," but still find that they can't escape their well-loved debut.

"It casts a large shadow. But again, I think we all understand that we're super lucky to have made a record like that. ... We'd be completely petulant kids if we totally downplayed that."

Adds Stanley: "It doesn't lessen our pride in it. It's just there all the time. Sometimes you want to do something you worked on in the last year as opposed to something you did 20 years ago."

Still, Hawkins and Stanley maintain that they're thrilled with the rehearsal process for the "Shakespeare" reunion shows. They're planning on playing the songs straight through in sequence, with an encore that will cover other material from their career.

Fans, of course, might wonder whether the band will ever issue anything new.

At this point, they aren't sure. Stanley admits he was a "bit disappointed" with the lukewarm reception that greeted 2004's "Sordid Fiction," which he said took two years to record and tour.

"It was almost like there wasn't really space in the collective marketplace for people to care about it," he laments. "It's a lot of work to do an album with a band like this and we were really proud of that record."

Still, they aren't ruling out doing another Lowest of the Low LP.

"With this band functioning at its best, it would be a pleasure to make another record," Stanley said. "But we haven't discussed it and it's not in the cards in the immediate future."

But would the group -- once incinerated by intraband friction -- be able to survive making another record?

"It's funny, I think we might have got all the fighting out of our system back in the day," Stanley replied.

"We got a LOT of fighting out," said Hawkins.

"There's actually no acrimony at all now. We could probably use a little sandpaper," Stanley added.

"I got some problems with you," said Hawkins, laughing now.

The band will play a show at Lee's Palace near Bloor Street West and Bathurst Street on Dec. 3