Ontario Liberal Leader Kathleen Wynne is pictured between glasses as she speaks during a campaign stop at Crosscut Distillery in Sudbury, Ont., on Wednesday, May 23, 2018. The official portrait of Ontario's first female premier is set to be unveiled at the legislature later today. THE CANADIAN PRESS/Nathan Denette

QUEEN'S PARK -- Former Ontario Premier Kathleen Wynne says the previous Liberal government "paved the path" for Premier Doug Ford's newly announced road to the Ring of Fire region, and suggests the Progressive Conservatives should "recognize" the work of their predecessors.

In an interview with CTV News Toronto Wynne said the former Liberal government spent two years negotiating a framework agreement with three First Nations to build an all-season access road that would help unlock development in the resource-rich area, and suggested that the Ford government piggybacked off the relationship.

"I don't begrudge the government coming to the next stage of an agreement," Wynne said. "The fact is that the only reason he was able to get that agreement is because for two years we worked with all nine First Nations, we had difficult conversations, we wrangled things out and we came to a framework agreement."

In August 2019, the Ford government ripped up those deals and sought to strike individual deals with the nine First Nations.

On Monday, Ford signed an agreement with the chiefs of two First Nations -- Marten Falls First Nation and Webequie First Nation -- that would kick off the initial planning and assessment required to build the road and called the deal "historic."

"After 15 years of delay by the previous government, we said we would build a road to the Ring of Fire, and we are working with our incredible partners in the Marten Falls First Nation and Webequie First Nation to do just that and make sure we do it right," the premier said. ""Together, we can bring jobs and prosperity to communities across the Far North. Promises made, promises kept." 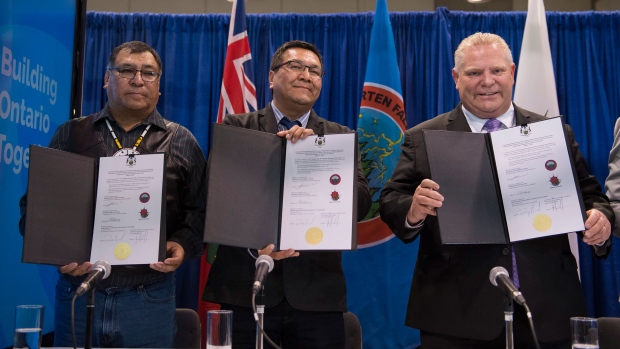 The difference between the Wynne deal and the Ford deal, a spokesperson noted on social media, is that the former government spent millions to land a framework agreement "that resulted in zero shovels in the ground."

"[Premier Ford] signed bilateral agreements with two willing partners so that we can move ahead and make the road a reality," said Ivana Yelich, a spokesperson for Premier Ford.

Wynne countered that Ford's deal was a result of relationship building that "took a lot of work and a lot of time" and said Ford shouldn't "pretend that these things can happen overnight."

"We literally paved the path for them to get to the deal."

Wynne said it will take the province decades to restore the relationship with Indigenous peoples which, she said, has been destroyed over centuries -- and suggested that it's dangerous for any government to ignore that reality.

"And any government that doesn't understand that is going to make bad mistakes."