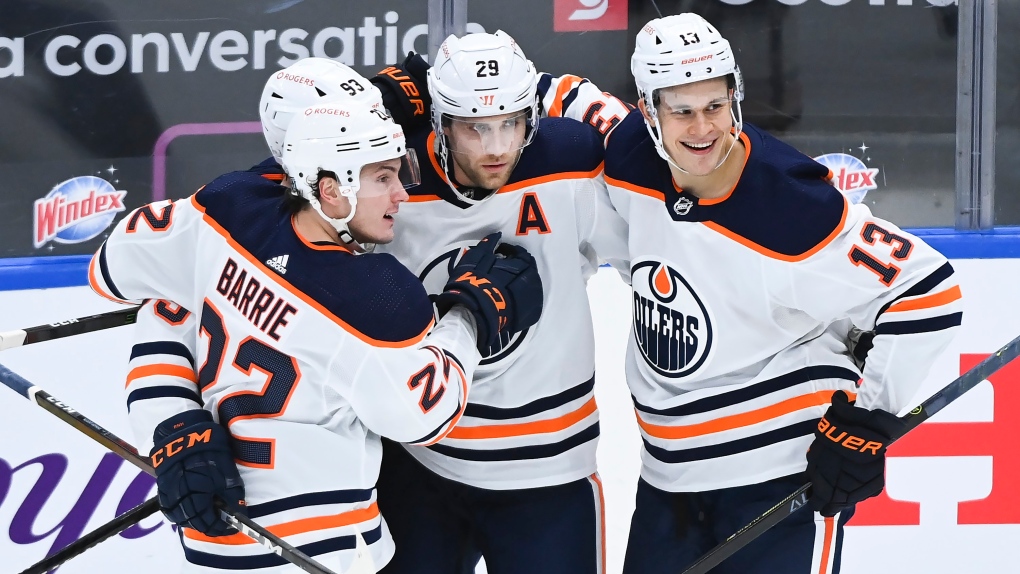 Kailer Yamamoto was credited with the opening goal for Edmonton (2-3-0) after the Leafs fumbled the puck into their own net in the first. Mikko Koskinen made 25 saves to get the win. Josh Archibald scored into an empty net with 1:06 left in regulation to seal it.

Auston Matthews replied for Toronto (3-2-0), which got 19 stops from Frederik Andersen.

Correctly billed as a battle of superstars between Matthews and Connor McDavid, the matchup fell far short of expectations with both teams unable to get much offensive traction.

Edmonton and Toronto will go back at it again Friday at an empty Scotiabank Arena in the second of nine North Division meetings between the clubs in the NHL's 56-game abbreviated schedule.

Draisaitl buried his first goal of the season at 9:12 of the final period with Jake Muzzin in the penalty box tripping. The reigning Hart Trophy and Art Ross Trophy winner fired home a loose puck after Ryan Nugent-Hopkins took the initial shot.

The goal snapped an 0-for-12 streak for an Oilers' power play that led the league with a success rate of 29.5 per cent in 2019-20 before the season was halted because of COVID-19.

The Leafs weren't able to do much in response before Archibald fired his first into an empty net.

Trailing 1-0 through 40 minutes, the Leafs evened things up at 6:44 of the third when Matthews outmuscled Zack Kassian in the corner before firing a shot shortside on Koskinen that the Edmonton netminder will no doubt want back.

Toronto once again dressed 11 forwards and seven defencemen, but was left with just 10 players up front when Joe Thornton headed to the locker room with what looked like an arm or wrist injury early in the period.

The Leafs came in feeling good about themselves after consecutive victories over Ottawa and Winnipeg, while the Oilers were in a different frame of mind following back-to-back losses to Montreal to close out their season-opening four-game homestand.

Playing their first road game since March 5, the Oilers grabbed a 1-0 lead at 10:42 of the first on a strange own goal from the home side. After the Leafs couldn't get out of their zone, Yamamoto fed a pass from behind Andersen's net that Toronto winger Jimmy Vesey intercepted before accidentally firing a clearing attempt in off Muzzin for Yamamoto's second of the season.

The Leafs held the Oilers to just three shots in the period, but Andersen had to be sharp with a pad save on Alex Chiasson late to keep the deficit at one.

Edmonton's power play - which went 0 for 10 and gave up two short-handed goals in those losses to Montreal - got two chances in the second period, but continued to struggle with former Leafs defenceman Tyson Barrie quarterbacking the first unit in place of the injured Oskar Klefbom.

The Leafs got their second man advantage off that sequence when McDavid, who scored a highlight-reel goal that even brought Wayne Gretzky out of his seat to put a bow on Edmonton's 6-4 victory in Toronto last January, was whistled for hooking.

Wayne Simmonds fired a shot looking for a tip from Mitch Marner that hit the post before Matthews flubbed one attempt and saw Koskinen snag another with his glove.

Notes: The Oilers head to Winnipeg for two following Friday's game before hosting the Leafs on Jan. 28 and 30. ... Toronto opens a four-game Alberta road trip Sunday and Tuesday in Calgary. ... The Leafs once again went with 11 forwards and seven defencemen, meaning blue-liner Mikko Lehtonen played his second NHL game after also dressing Monday.

This report by The Canadian Press was first published Jan. 20, 2021.