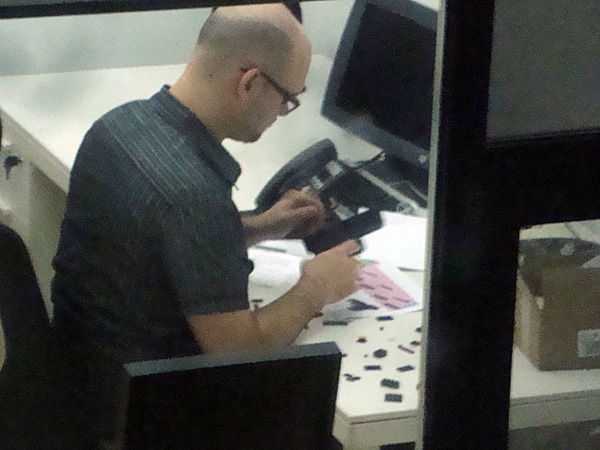 This is what Michael Dent saw as Jeremy Bell assembled a replica handgun made of Lego. (Michael Dent/Special to ctvtoronto.ca)

A Toronto designer became a participant in a real-life Flashpoint-style event when police tactical officers showed up at his workplace over a firearms call that involved a Lego gun.

"I've had numerous people either say, 'Oh my God, I thought Flashpoint was just filming,' or, 'This is totally going to be a Flashpoint episode at some point'," Jeremy Bell told ctvtoronto.ca on Thursday. "Yeah, it's pretty surreal."

Flashpoint is a CTV drama, set in Toronto, about a police "strategic response unit."

Late Wednesday afternoon, Bell -- a partner with the digital design firm Teehan+Lax, located at 460 Richmond St. W. -- was assembling a replica handgun made out of Lego that had arrived.

"It arrived yesterday and at the end of the day, I decided to put it together. I literally assembled it, handed it to a co-worker (who promptly broke it) and then put it back in the box," Bell wrote in a posting on his personal blog.

Across the street, Michael Dent was working in his third-floor loft. He saw what he thought was someone assembling a firearm, so he took some photos and called the police.

"I don't really like guns right beside me -- and then it turned out to be Lego," Dent chuckled.

But he added, "My girlfriend is moving in with her daughter and stuff, and it looks right into our loft where we sleep, so no, not cool."

Dent said the door of the office was shut, and it never is, so for all he knew, someone might have been laid off "and about to go postal, so that's why I called."

Bell was in his office and then heard a voice yelling his name and instructing him to come into the hallway.

"At first I thought, 'who did I piss off?' I wasn't worried about my safety ... but I certainly wasn't expecting to see an armed officer," he said, adding he couldn't remember what type of firearm was pointed at him.

Bell said he knew he hadn't done anything wrong.

"As soon as I realized they were actual cops and this was not a joke, I was, 'What else could it be? It's got to be the stupid Lego gun I put together'," he said.

Police had him put his hands on his head and walk backwards towards them. "They cuffed me, pulled me into the stairwell and threw me against the wall. They spread my legs and checked to make sure I didn't have a weapon on me," he said.

Bell said he told them where the Lego gun was, they went to check it out and then uncuffed him. He was handcuffed for about 90 seconds.

After seeing the photos, Bell said he can understand why Dent called the cops, although to him, it's still clearly Lego.

"There's like a million pieces on the table," he said, adding, it's not like he waved it around or took it out on the street.

Const. Tony Vella of the Toronto Police Service said no charges resulted from the incident, the response for which involved uniformed and tactical officers.

"We have to take all the gun calls seriously because we don't know what we're getting involved in," Vella said. "There's the potential for public risk as well as the risk to the officers' safety."

On his blog, Bell wrote: "The cops clearly don't take this shit lightly."

Dent wondered what his phone call cost the city in taxes.