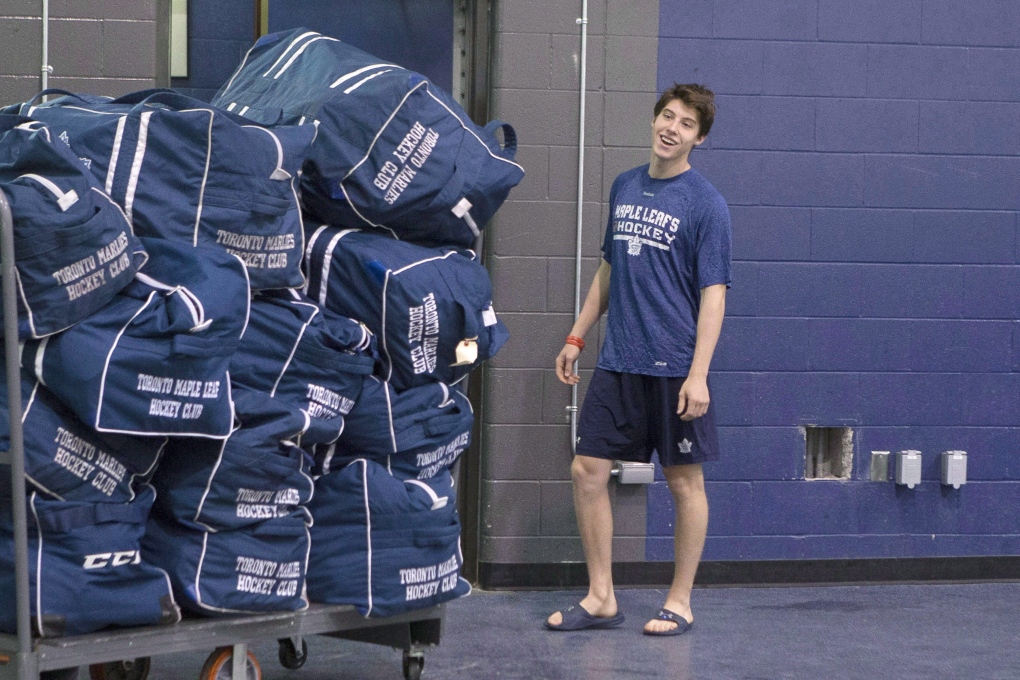 Toronto Maple Leafs' Mitch Marner is pictured at the team's training facility in Toronto, on Thursday September 22, 2016. Players sometimes joke in the Maple Leafs dressing room that Marner is young enough to be their kid.One of two teenagers on the Toronto roster, Marner looks even younger than his 19 years off the ice. On it, he and Auston Matthews, also 19, look every bit like ready-made NHL players.THE CANADIAN PRESS/Chris Young

TORONTO -- Veteran Matt Martin ambles by scrawny 19-year-old Mitch Marner in the Maple Leafs dressing room and playfully shoves him aside. Marner pokes his nose into Tyler Bozak's business a little while later and is told cheerfully to scram.

With his diminutive 170-pound frame, Marner might look like the little brother on the Leafs, but that hasn't stopped him from making a big early impression in the NHL. Darting around the ice like a pinball, Marner has already rung up four goals and 10 points in 13 games for his hometown team.

Even before he was plucked with the fourth overall pick at the 2015 draft, Marner was peppered with those questions. He thinks that while most in the hockey world paid attention to junior hockey and probably saw his awesome Ontario Hockey League numbers (including 126 points in 2014-15), they weren't really watching to see how those numbers were compiled, how he managed to succeed against bigger, stronger opponents.

"I think, really, no one understood how much I dodge checks to try and get out of the way of them," Marner said.

Out of his equipment, Marner looks a lot smaller than the official listing -- six feet and 170 pounds -- and lacks the chiseled physique of many NHLers. He hasn't gotten much bigger over time either; three years ago, when he first checked into the OHL, Marner was listed at 160 pounds.

Size was no barrier over three wicked seasons with the London Knights though, and thus far with the Leafs, it looks to be a dead issue once more.

"It's never been a big deal to me," said Marner, one of only 11 NHL players currently listed at 170 pounds or less. "I've grown up with everyone always saying he's too small and stuff like that."

Marner's comparatively tiny frame is actually an advantage in the eyes of his two current linemates in Toronto. Because he's low to the ice, and also quick, skilled and shifty, he's difficult to check. Ask a bigger defenceman, Bozak said, and he would certainly rather face a larger forward without Marner's slippery approach.

"He's not trying to outmuscle guys, he's trying to outsmart guys and use his quickness and speed to get around guys."

"He knows how to manipulate the defencemen -- their feet -- so they can't ever really get a good read on him," James van Riemsdyk added. "I'd say if you look at all the players that you would call strong on the puck, a lot of them tend to be not necessarily the biggest guys -- the guys like the Johnny Gaudreau, (Patrick) Kane. They move so well and they're so hard to get the puck from because they move so well and they know how to use the ice to their advantage and find space."

Because Marner has good balance and a low centre of gravity he's able to shift directions in a hurry, which means he can easily escape situations where brawn might otherwise be required. In other words, there's no need to fight for pucks in the corner or along the walls if you're never in that position to begin with.

"You can be as strong as you want, but if someone has body positioning on you it makes it really hard to do anything about it," van Riemsdyk said.

Watch Marner and he's usually darting from one spot to another, feverishly pursuing the puck or slipping around defenders to get open. Bozak said he has a knack for finding space that way, too slippery for opponents to stick with for more than a few seconds.

Watch Marner lose the puck, meanwhile, and he'll doggedly work to get it back. His competitiveness has impressed Leafs coach Mike Babcock.

Hockey culture still looks down on the littler player to some degree -- think Tyler Johnson's omission from Team USA at the World Cup of Hockey -- but players like Kane, Gaudreau, Johnson, Martin St. Louis and Daniel Briere have thrived despite their lacking stature. Much of the evolution is owed to rule changes after the 2004-05 lockout, which halted the clutching, grabbing, hooking and holding that might otherwise have impeded their progress.

Though the NHL is obviously new terrain, Marner has been combating comparatively humongous opponents his whole hockey life. He's learned to weaponize his elusiveness, zipping across the ice to avoid checks while hurdling past those who question his slight frame.