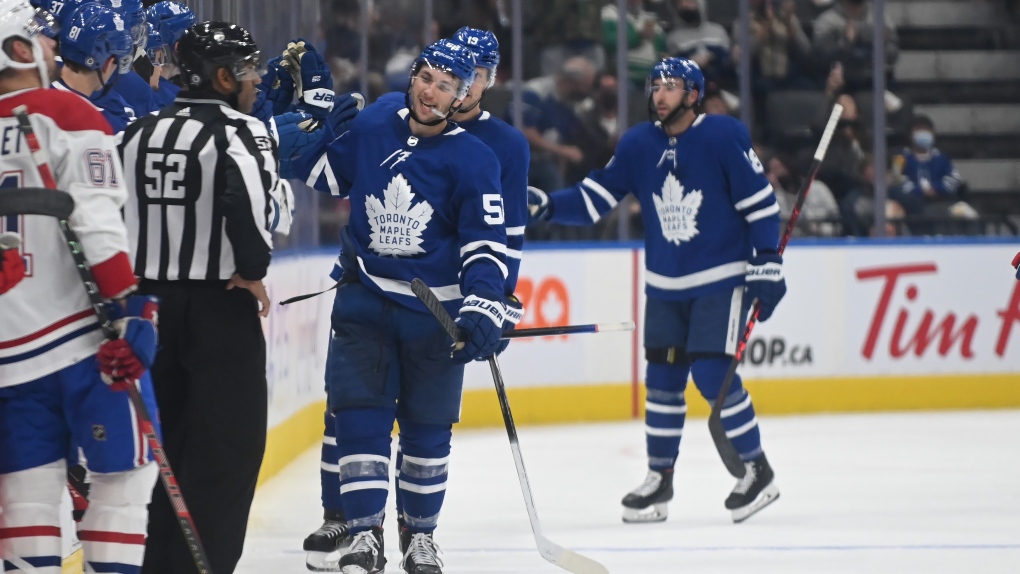 Toronto Maple Leafs' Michael Bunting (58) celebrates his goal against the Montreal Canadiens during the second period of their NHL preseason hockey game in Toronto on Saturday, Sept. 25, 2021. THE CANADIAN PRESS/Jon Blacker

It's easy to understand why.

Toronto played in front of its home fans for the first time in more than 18 months, John Tavares scored in his return from a scary injury, and the Leafs defeated the Montreal Canadiens 4-1 in the opener of the NHL's pre-season schedule.

The game at Scotiabank Arena played before 10,000 mask-wearing fans was the first event at the venue with paying spectators since March 2020 after the Ontario government relaxed COVID-19 restrictions Friday, allowing for 50 per cent of normal capacity.

“Really nice to be back playing in front of fans,” Keefe said. “It was pretty special. It's been so long. You get comfortable playing in front of no fans and all of that, but you quickly realized even in a pre-season game and even with just 10,000 fans it was just different - way different.

Jake Muzzin, Michael Bunting and Kurtis Gabriel had the other goals for the Leafs, while William Nylander and T.J. Brodie chipped in with two assists each.

“It was nice to see all the people back in the building,” Muzzin said. “Man ... you don't know how much you miss it until it's gone.

Michael Hutchinson stopped 13 shots to get the win. Ian Scott started the third period in place of Hutchinson and made three saves before leaving with a groin injury to send Toronto's starter back in the crease.

Tyler Toffoli replied for the Canadiens, who stormed back from a 3-1 series deficit to eliminate the Leafs in the first round of last season's playoffs on the way to making the Stanley Cup final. Cayden Primeau allowed three goals on 21 shots before giving way to Michael McNiven. He finished with 10 saves.

“It looked like we flew in this afternoon and played our first pre-season game,” Montreal centre Nick Suzuki said. “I thought our third period was really good, we put a lot of pressure on them.”

The NHL kicked off its exhibition schedule ahead of the full 82-game season on the heels of a 2020-21 campaign shortened to 56 contests because of the pandemic.

Toronto opened the scoring at 10:28 of the first when Nylander found a late-arriving Muzzin to fire past Primeau.

Tavares, who suited up in game action for the first time since being stretchered off the Scotiabank Arena ice following a scary collision in the Leafs' post-season opener against Montreal on May 20, made it 2-0 at 1:55 of the second when he tipped home Nylander's shot on a power play.

“I'd be lying to say it was just the normal pre-season game,” Tavares said. “Things overall didn't end on a great note (in the playoffs), and obviously, personally, I don't ever want to go through something like that, but it happened.”

Toronto's captain spent the night of the injury in hospital, and while he slowly worked to physically get back on the ice for a night like Saturday, Tavares also focused on the mental side of his recovery.

“It was important for me to recognize I went through something significant and traumatic,” he said. “Even though I don't have any memory of it, clearly it was something that impacted me and my family very significantly. It was important to address that and to manage those emotions and process that.

“I've had great people helping me.”

Looking to earn a spot with his hometown team after signing in free agency, Bunting pushed Toronto's advantage to three at 7:25 when he redirected a Brodie feed in front.

“I've just got to keep working,” said Bunting, who played on a line with Tavares and Josh Ho-Sang. “This is just the beginning.”

The Canadiens registered five shots in the first, but were stuck on that number for most of the second - Cole Caufield missed the net on a breakaway and then again on a 3-on-0 rush - before Montreal finally tested Hutchinson late in the second with two pucks directed on target.

Another local product looking for a job with Toronto, Ho-Sang nearly made it 4-0 midway through the third, but McNiven turned aside his breakaway effort.

Gabriel and Toffoli traded late goals to round out the scoring.

The pandemic brought the sports world to a screeching later that week.

The Canadiens - Cup finalists after coming out of the pandemic-necessitated, one-time-only North Division - played the majority of their playoff games in front of fans both at home and on the road in the U.S., including Game 6 at the Bell Centre against the Leafs in the first round.

Toronto welcomed 550 fully vaccinated health-care workers for Game 7 of that matchup in late May, which the Canadiens won 3-1 to complete that stunning 3-1 series comeback against their Original Six rival.

All spectators in attendance Saturday were required to provide proof of full vaccination along with government-issued identification. Guests with a verified medical exemption and proof of a negative COVID-19 test were also allowed into the building.

Children under 12 years of age are exempt from those rules, and all fans are required to wear masks except when eating or drinking.

“It was fantastic,” Tavares said. “Great energy in the building, great having our fans back.

The Leafs' hope is to have Scotiabank Arena at full capacity when they open the regular season Oct. 13 at home against the Canadiens.

“It was just really nice to have them back,” said Keefe, who like Montreal counterpart Dominique Ducharme dressed about half his NHL roster. “Thanks to everybody across the province that have done the right things ... taking care of themselves for us to get to this point.”

This report by The Canadian Press was first published Sept. 25, 2021.