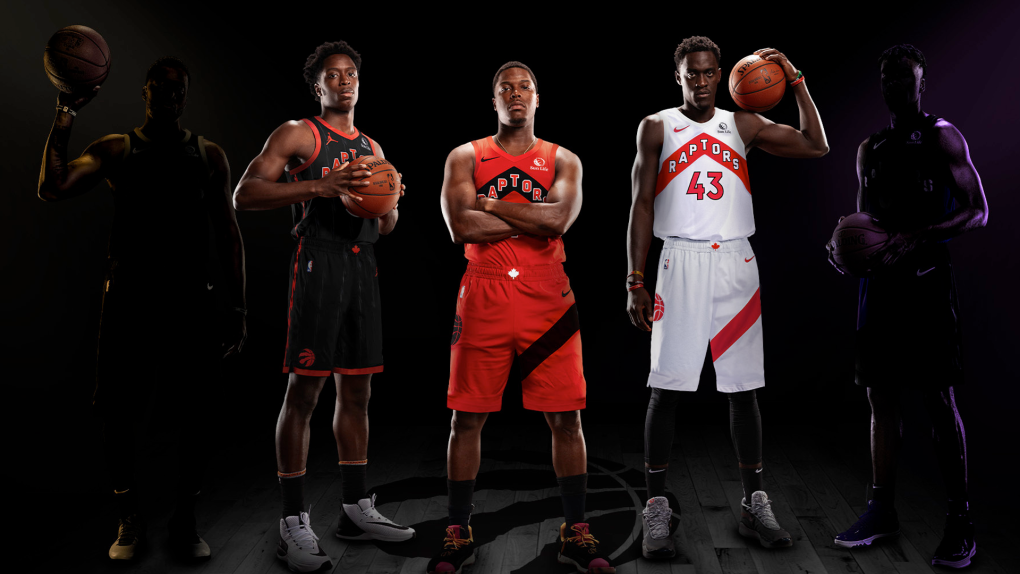 TORONTO -- Some of Kansas City's most famous residents want to call the Toronto Raptors their home team.

On the heels of reports the NBA season will tip off Dec. 22, and with federal and provincial restrictions around COVID-19 potentially keeping the Raptors out of Scotiabank Arena, there's been rampant speculation about where the 2019 NBA champions will play.

Mahomes, the 2020 Super Bowl MVP, posted on Twitter "Bring them to KC!" with a flexed-arm emogi, to which Mayor Lucas replied: "Working on it."

On Tuesday morning, the mayor wrote: "Good morning, Kansas City! It's currently 13 degrees colder here than in Toronto (7 degrees Celsius)," with the hashtag "We the North."

We heard you might need a temporary home for the upcoming @NBA season, @Raptors. We'd love to have you in Kansas City.

Mayor Lucas and members of the KS and MO delegation today encouraged the NBA and Raptors to select Kansas City as the team's host city for the 2020-21 season: pic.twitter.com/knyUEwYBlX

The Chiefs' right guard Duvernay-Tardif, a medical school graduate from Quebec who opted out of the NFL season due to concerns around COVID-19, replied: "Merci monsieur! Definitely feels like home," with a happy face.

The T-Mobile Center in Kansas City has close to 19,000 seats for basketball. The 13-year-old downtown arena has hosted games in the NCAA women's and men's basketball championships as well as NBA and NHL pre-season games.

Kansas City, Louisville, Ky., Hartford, Conn., and the New York area have been some of the suggestions as temporary home courts for Toronto.

Raptors spokesperson Jennifer Quinn, however, told The Canadian Press on Tuesday "Our focus is on playing in Toronto."

After the federal government denied the Toronto Blue Jays permission to play at Rogers Centre this season, the Major League Baseball team played home games in Buffalo, N.Y., after politicians from just across the border pitched the city as a temporary home.

All three Canadian Major League Soccer teams have been playing recent home games in the United States. Toronto FC is in East Hartford, Conn., the Montreal Impact are in Harrison, N.J., and the Vancouver Whitecaps are in Portland.

"I don't think our hotel could accommodate both of us at the same time, but it would be great to have them nearby," Vanney said.

The Connecticut experience has been excellent, the coach said.

"For me . . . it's the living situation, and the field," Vanney said. "Those are the most important things, and so far the place that we've been staying has been phenomenal in terms of the living conditions, the food and everything has been great."

He said some of the fields have been "touch and go" as the weather gets colder.

"(But) In terms of basketball, I assume you find a court and the court is generally the same, so it's doable."

Toronto FC's hotel is across the street from the XL Center in Hartford, a potential home arena for the Raptors. It seats around 16,000 for University of Connecticut basketball games, and is also home to the Hartford Wolf Pack of the American Hockey League.

The Harry A. Gampel Pavilion in nearby Storrs, Conn., seats just over 10,000 and also hosts some UConn basketball games.

The Raptors haven't played a game at Toronto's Scotiabank Arena since Feb. 28, a 99-96 loss to Charlotte. The 2019 NBA champions were ousted in the second round of the playoffs by Boston once the season resumed in the NBA bubble at Walt Disney World in Florida.

This report by The Canadian Press was first published Oct. 27, 2020.