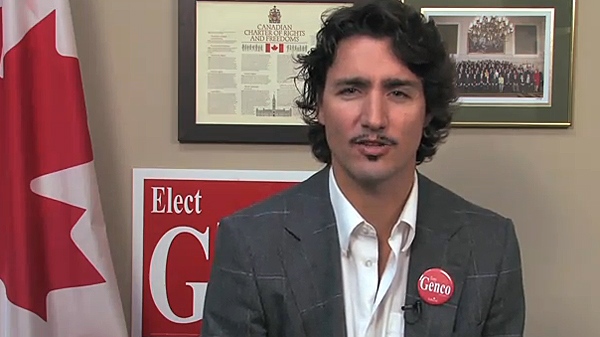 In the political battle to win the federal riding of Vaughan, the Liberals have rolled out the son of the father of Canada's Charter of Rights and Freedoms to attack Conservative candidate Julian Fantino.

Montreal Liberal MP Justin Trudeau released a video on YouTube Thursday attacking Fantino, thought to be the frontrunner in the Nov. 29 byelection, for his views on the Charter.

"I was so shocked to find out what Julian Fantino thinks about the Charter," Justin Trudeau said in the video.

"Fantino said, and I quote: 'Who has reaped the greatest benefit from the Charter of Rights and Freedoms? I would argue that, if it isn't common criminals, then it must be the Hells Angels.' We need people in Ottawa who want to protect the Charter of Rights, not tear it down. That's what's at stake in this election in Vaughan."

In a written response supplied by his campaign, Fantino said Friday: "After serving for over 40 years as a police officer, I don't need any lectures on law and order from a novice member of the 'hug-a-thug' Ignatieff party."

Maurizio Bevilacqua had held the seat for the Liberals since 1988, winning by more than 8,000 votes in 2008. But he stepped down from federal politics to make a successful run for the mayor's office in Vaughan.

Tony Genco is running for the Liberals, although the Tories said the Liberals had tried to recruit Fantino as a candidate.

Both candidates live in the riding of about 154,000 people just northwest of Toronto, but Fantino has a much higher public profile. He stepped down earlier this year as commissioner of the Ontario Provincial Police, following stints as police chief in Toronto, York region and London, Ont.

Fantino has been portrayed by some as running a tightly-controlled campaign. He has been sparing in his granting of interviews, and missed one of two debates. A spokesperson for Fantino's campaign said the candidate missed one debate to attend a memorial service for his father-in-law.

In a statement to ctvtoronto.ca supplied by a campaign spokesperson, Fantino said that he has met with thousands of residents, done a televised debate and "countless interviews."

"Meeting so many residents is a humbling experience and I am grateful for all the support I have received so far. What I am hearing at the doors and in meetings is clear, residents are looking for a member of Parliament with a proven track-record of getting things done as a public servant and community leader."

Fantino did get an endorsement from television personality and hockey commentator Don Cherry earlier this week -- something the Liberals have countered by having Toronto Liberal MP and Hall of Fame goaltender Ken Dryden send out a telephone message in support of Genco.

If Fantino does prevail, it would give Prime Minister Stephen Harper's Conservative government another seat in the GTA, although it remains shut out of the city of Toronto.

A Liberal loss would be embarrassing for party Leader Michael Ignatieff, who sits as MP for Etobicoke-Lakeshore in Toronto.

Two other by-elections are scheduled for Monday -- Winnipeg North and Dauphin-Swan River-Marquette. Both are in Manitoba.