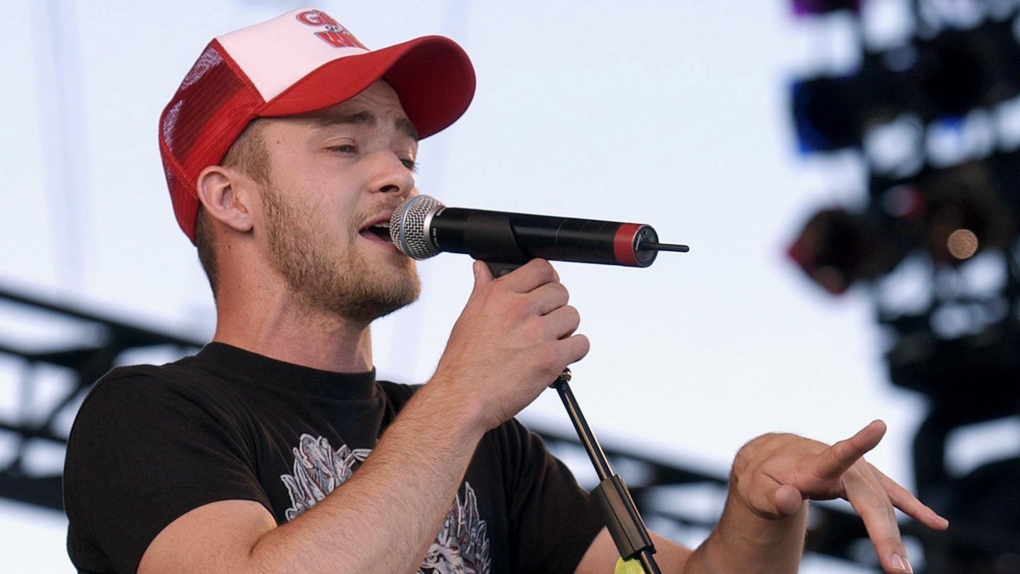 Justin Timberlake performs during the concert for SARS relief at Downsview Park in Toronto Wednesday July 30, 2003. THE CANADIAN PRESS/Aaron Harris

TORONTO -- Justin Timberlake is still haunted by being pelted with what he says were bottles of urine at the 2003 Toronto SARS benefit show.

The "Can't Stop the Feeling" singer appeared on the "The Graham Norton Show" on Friday where he reflected on the nasty reception he received at the charity event.

Reports at the time say Timberlake was booed and that water bottles were thrown -- but Timberlake says those plastic containers were filled with pee.

"You would think Canadians are historically peaceful people," he told the panel of celebrity guests on the comedy talk show.

"I still have a lot of trauma," he joked.

Timberlake says it all started when he was invited by Mick Jagger to perform at the 11-hour Toronto fundraiser attended by a crowd of an estimated 450,000 people.

The former 'NSync member was hot on the heels of his solo debut album "Justified," which was in heavy rotation on MTV and MuchMusic. He was already in town for two stadium shows, so he agreed to make an afternoon appearance at the SARS event.

But he says it became quite apparent when he arrived at the show that he'd be an outlier in the lineup of mostly established rock acts.

"I look at the bill and it's the Rolling Stones, AC/DC, and the Guess Who. You get the picture," he said. "And like, somewhere in there -- me."

That's when he knew things were going south.

"It was a bit of a blur, but I just remember saying to the band before we went on stage, 'I don't think this is going to go well,' " he said.

Timberlake said when opened his three-song set the bottles of urine started flying from the front rows of the audience.

Anna Kendrick, who appeared on Graham Norton's show alongside Timberlake to promote their film "Trolls World Tour," was quick to question how the incident unfolded.

"Did they do it really quickly? Was it preplanned?" she asked.

Timberlake says he was puzzled: "All of these questions I had going through my brain as I tried to at least remember lyrics that I actually wrote to the first song I'm playing."

The singer said he dodged the projectiles as best he could before taking an unmovable spot behind his keyboard to sing "Senorita."

"It wasn't always good times for me, you guys."

Timberlake says he was impressed with how he handled the situation, and suggested there's a lesson in this for younger generations: "Be tenacious."

This report by The Canadian Press was first published Feb. 16, 2020.