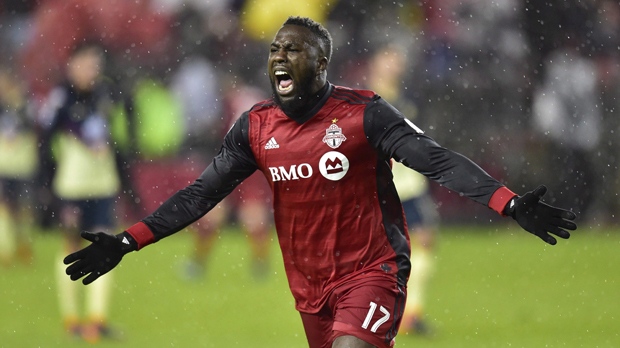 TORONTO -- Alejandro Pozuelo has yet to arrive but Toronto FC should get Jozy Altidore back on the field for Sunday's home opener against the New England Revolution.

Altidore, who underwent ankle surgery prior to the end of last season, is expected to see some action on the weekend. Pozuelo, the Spanish attacking midfielder signed from KRC Genk in Belgium, is slated to arrive later this month and will likely make his MLS debut March 29 against visiting New York City FC after the international break that follows this weekend's schedule.

Altidore, who recently signed a three-year contract extension that will keep him in Toronto through the 2022 season, is excited about returning to action despite being behind on match fitness.

"I want to get on the field and score at BMO (Field)," he said after training Friday.

How pumped is the 29-year-old Altidore about staying in Toronto? He's already thinking about his next TFC deal.

"This is home to me. Even with this contract I'm already looking beyond that in terms of what I can do now to make it so I never leave."

Toronto has been off since winning its season opener 3-1 in Philadelphia on the strength of two goals from Michael Bradley and one by Nick DeLeon.

"I'm jealous, man. He's got two up on me right now and I gave him a hard time," Altidore said of Bradley with a smile. "I said 'That's going to change man, I'm coming for you."'

Bradley, who has stuck to defensive midfielder duties in recent years, had more license to move up the field in the Philadelphia game given he had Marky Delgado alongside him.

"In certain games those scenarios will continue to arise," said coach Greg Vanney.

The key for Vanney is that if Bradley does move forward, there is someone to take his place so the team does not fall vulnerable to counter-attacks as it has in the past.

The bye has given Vanney more time with a team that is still very much a work in progress with Pozuelo and possibly other recruits still to come.

But Vanney likes what he has seen from the players he has. The win in Philadelphia showed a team playing for each other and Vanney says he has seen more of that on the training field.

"In our league, where the margins are fine, if you have team chemistry and team camaraderie, it pushes the bar in your favour just a little bit more," he added.

Added Altidore: "I see a group that's very together."

The Revolution have Canadian ties in Tajon Buchanan, a 20-year-old midfielder-forward from Brampton, Ont., who went ninth overall in the January draft. The Syracuse University product saw 10 minutes action off the bench against Columbus.

Vanney will have his eye on Spanish playmaker Carlos Gil (pronounced Heel), who joined New England as a designated player in January from Spain's Deportivo La Coruna.

"He's very crafty with his left foot," Vanney said. "He will float around the field and try to find the ball ... They can expose you if you're not dealing with him the right ways."

Vanney sent one of his coaches down to BMO Field to check on the playing surface, which was more like a beach for the Feb. 26 CONCACAF Champions League game against Panama's Club Independiente due to the sand on the field.

"We're making progress," Vanney said of the grass. "I think we have to be realistic about what kind of progress we can make in those two weeks but we're definitely moving in the right direction."

Vanney's team left the bubble at its training centre Friday, practising outside for the first time.