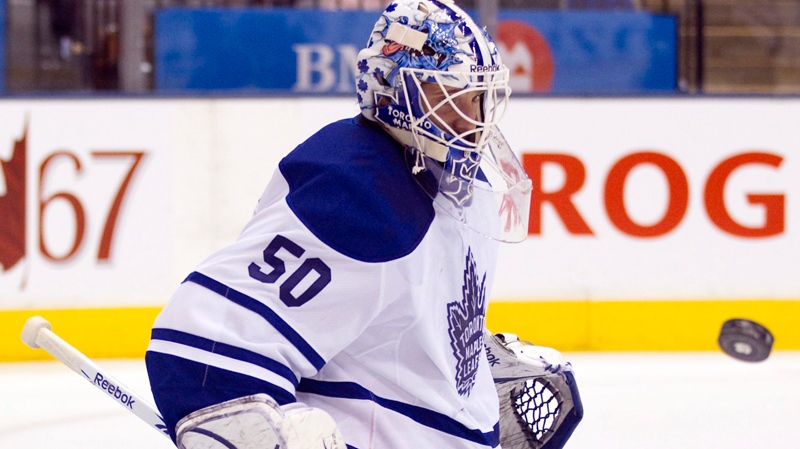 It was the team's second straight victory after an ugly stretch of eight games without a win.

The Maple Leafs will be relying heavily on Gustavsson while Giguere recovers from a groin strain. He's expected to be out one to two weeks.

Dainius Zubrus had the lone goal in reply for the struggling Devils (5-12-2).

The mounting problems for New Jersey might have got even bigger. Already hampered by injuries, goaltender Martin Brodeur was replaced by Johan Hedberg after two periods -- although no reason for the change was provided. Brodeur watched the final 20 minutes from the end of the bench.

Versteeg scored his fifth goal of the season on Hedberg with less than seven minutes to play in regulation to ice the victory. He one-timed a shot on the power play, giving Toronto six goals in its 11 opportunities with the man advantage.

A game between two of the lowest-scoring teams in the league delivered as expected -- tight-checking hockey with little offensive flair.

The suddenly scorching Leafs power play also accounted for the game's opening goal. Brodeur kicked out a big rebound, which Grabovski hammered home at 1:42 of the second period. It was the fifth goal in six games for the Belarusian centre.

Kessel made it 2-0 after being thwarted on a couple good opportunities earlier in the game. Standing alone at the side of the goal, he took a nice pass from Kadri and beat Brodeur at 6:29.

The Devils narrowed the lead before the end of the period with a goal Gustavsson could have stopped. Zubrus had Alexander Vasyunov's shot go off his skate and through the Swedish goalie's legs at 10:14.

But Gustavsson stood tall with the Devils pressuring late in the game, helping Toronto secure another victory.

Notes: Carl Gunnarsson was back in the Leafs lineup, replacing Brett Lebda on the blue-line ... Kadri has three assists in three games ... Stephen Gionta played his fifth career game for the Devils. His brother Brian is captain of the Montreal Canadiens ... Leafs centre Tim Brent played his 18th straight game. The 26-year-old had only appeared in 19 total prior to this season ... Announced attendance was 19,271.