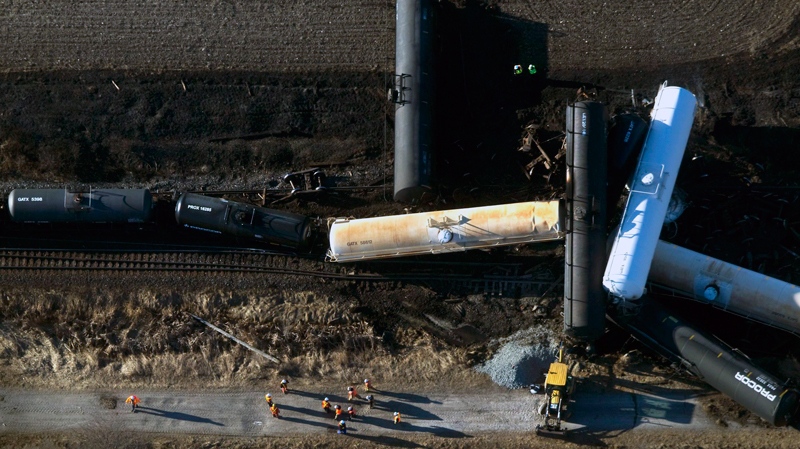 Jet fuel has been cleared from the site of a train derailment near Cobourg but it will be late Wednesday before the track reopens.

CN Rail says work is expected to continue today to remove 25 freight cars that left on the track Sunday, about an hour east of Toronto.

There is a slow-burning fire in one of the cars, which officials are watching, but more cleanup is needed before that can be dealt with.

Buses are transporting Via Rail customers on the Toronto-Montreal and Toronto-Ottawa lines to their destinations.

Meanwhile, the evacuation zone at the scene has been reduced to six residences and three businesses.

More than a dozen homes were evacuated Sunday near the derailment in Hamilton Township, which separates Cobourg and Port Hope.

The OPP has reduced the evacuation zone around the spill site from 800 metres to 400 metres.

And police say the Declaration of Emergency put into effect after the spill will continue to be enforced until further notice.

Frank Binder, a CN spokesperson, told CTV News that the company is currently working with the Transportation Safety Board of Canada (TSB) to determine the cause of the derailment.

The board is an independent agency that investigates marine, pipeline, railway and aviation incidents.

CN crews spent the night cleaning up the fuel spill with vacuum pump trucks and are now removing the derailed cars scattered along the tracks.

Of the 25 cars, two carried jet fuel and another carried propane.

More than a dozen homes were evacuated on Sunday near the site of the derailment in Hamilton Township.

The OPP has also said that anyone who was evacuated yesterday should check with one of the checkpoints to see if they are allowed to return to their residences.