The premiers met in Mississauga to discuss their priorities and define their goals in terms of a relationship with the federal government. But before the meeting got underway, Ford decided to present each leader with a gift.

Wearing a Winnipeg Blue Bombers jersey—a consequence of a lost bet to Manitoba Premier Brian Pallister over the Grey Cup—Ford handed each premier a Toronto Maple Leafs jersey. The jerseys, which were paid for by the Ontario Progressive Conservative Party, were personalized and meant to be a token of provincial cooperation. 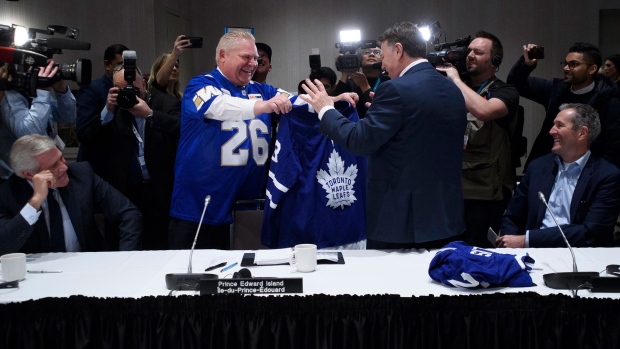 After the merchandise was handed out, at least one premier said across the table “what about your Senators?”, a reference to the Ottawa Senators, the other Ontario hockey team competing in the National Hockey League. Ford appeared to laugh when pressed about the choice of sports jerseys and shook off the question.

Most of the premiers seemed to be thrilled with the gift, laughing and allowing the media to take photographs. Others made a show of saying they shouldn’t touch the jersey because they were fans of the Vancouver Canucks or the Montreal Canadiens.

“I don’t know if I can touch this,” said Prince Edward Island Premier Dennis King with a smile. “My son is so ashamed of me right now. I don’t know what to do with it.”

Quebec Premier Francois Legault accepted the gift with a laugh and a handshake—saying that Ford owed him dinner for the games the Habs won over the Leafs.

Premier Doug Ford welcomes his fellow Premiers to the Council of the Federation meeting by giving all of the Leafs’ jerseys. #cdnpoli #onpoli pic.twitter.com/6AwZ1xSmp8

Despite the division of hockey fans, the 13 premiers all agreed to ask the prime minister for a meeting to discuss economic competitiveness, the fiscal stabilization program, healthcare and infrastructure, and northern priorities.