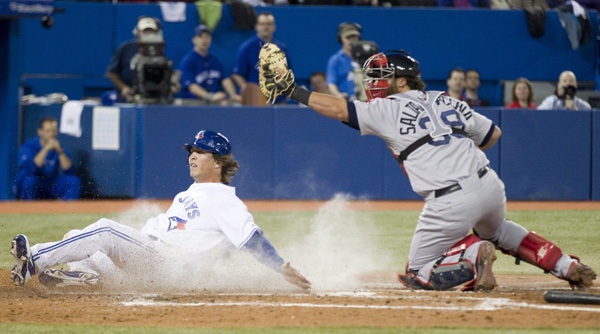 The veteran reliever, obtained in the off-season from the Chicago White Sox to be Toronto's closer, blew his second save of the season as the Boston Red Sox rallied for three ninth-inning runs to earn a 4-2 victory and spoil the Blue Jays' home opener.

Santos (0-1) came on to protect a 2-1 Toronto lead to start the ninth but only lasted two-thirds of an inning, giving up two hits, three earned runs, three walks and a wild pitch while fanning one.

And to add insult to injury, the boisterous Rogers Centre sellout of 48,473 -- the Jays' largest home-opening crowd since drawing 50,171 in 2008 for a 6-3 win over Boston -- roundly booed him off the field when he was replaced by Luis Perez.

"I'd be booing too, it wasn't pretty," Santos said. "It's tough because you feel you let 24 other guys down that you have been working hard with for the last two months.

"But I have to be ready for tomorrow. I hope it's another safe situation and I can get back out there. All I can do is be prepared for the next job and hopefully get the job done. I'm throwing some good pitches, unfortunately the couple of bad ones I am throwing they're hitting. It's baseball and I'm not going to pout and whine about it. It is what it is."

Dustin Pedroia, who homered earlier in the game, belted a leadoff double for Boston (1-3) and scored on Adrian Gonzalez's sacrifice fly. Ross later came home on the wild pitch by Santos.

There would be no comeback for Toronto (2-2) as Boston right-hander Alfredo Aceves retired Brett Lawrie, Eric Thames and J.P. Arencibia in order in the ninth for the save. Scott Atchison (1-0), who relieved Red Sox starter Felix Doubront after the fifth, earned the win.

"Sergio remains our closer," Farrell said. "He got into a situation after the leadoff double I thought he started to overthrow his fastball.

"He yanked a number of pitches out of the strike zone. The two walks obviously led to those three runs. Right now we're not in sync all the way around. Our offence will get on track. Runs are at a little bit of a premium right now."

Boston's comeback spoiled a solid outing by Toronto starter Henderson Alvarez, who went six solid innings in a historic outing. At 21 years 355 days Alvarez became the youngest Blue Jay to start a home opener in club history. The distinction previously belonged to Jerry Garvin, who was 22 years 174 days when he started Toronto's home opener against the Detroit Tigers on April 14, 1978.

Alvarez allowed four hits, one run and a walk while fanning two. He had good command of hit pitches as 12 of his 18 outs came on grounders. His lone miscue came against Pedroia, who belted a solo homer.

"His two-seam fastball is pretty darn good. He's going to be good for a long time."

Boston finally earned its first win of the season after opening the campaign by being swept in Detroit. Bobby Valentine, in his first season as the Red Sox manager, had nothing by praise for Pedroia.

"I don't have enough words to talk about Pedroia," he said. "I came here at 12 o'clock and figured no one would be here and he was here pacing and said we've got to get the monkey off our back and let's go.

Alvarez was pleased with his performance.

"All I was doing was trying to get ahead of the hitters," the Venezuelan said through an interpreter. "I was able to throw the ball well in my first opening day here in Toronto and I was very pleased with that."

Toronto dropped to 26-10 in home openers and 16-7 at Rogers Centre, having lost two of its last three there.

Fans were in a boisterous mood all night, frantically waving white towels to support a solid play by the Blue Jays or to offer inspiration to Toronto batters. But fans in the upper deck watched the game with only one beer in hand after sales were restricted to the seating area. Spectators were limited to just one beer per trip Monday, half of what's allowed at regular games.

Other concession stands at Rogers Centre weren't affected. In the 2009 home opener against Detroit, fights broke out in the stands and the game was delayed when fans threw litter on the field.

Monday's gathering was well behaved with only one fight that broke out in the lower level.

Toronto opened the scoring with two in the bottom of the third. Colby Rasmus scored on Kelly Johnson's fielder's choice as Doubront handled Johnson's comebacker to the mound and threw home. But Rasmus, who made a sparkling diving catch in centre in the second before delivering a one-out triple, managed to beat Jarrod Saltalamacchia's tag.

Yunel Escobar made it 2-0, scoring from second on Edwin Encarnacion's RBI single.

Boston threatened in the top of the fifth after Ross's single and Sweeney's ground-rule double put two on with one out. But Alvarez got Saltalamacchia and Mike Aviles to both ground out and end the threat.

The Red Sox got their first run of the game in the top of the sixth on Pedroia's first homer of the season.

Monday's contest opened an 11-day, nine-game homestand for Toronto. Following the three-game series with Boston, the Blue Jays will have a day off Thursday before opening a three-game weekend set against Baltimore. The club will have another off-day April 16 before finishing up with three games against Tampa Bay.

NOTES --Toronto slugger Jose Bautista, who led the majors last season with 43 home runs, received his Silver Slugger award prior to the game then went hitless in four at-bats . . . Toronto is scheduled to send right-hander Kyle Drabek to the mound in the second game of the series Tuesday night against Boston, with the Red Sox to counter with right-hander Daniel Bard. Blue Jays ace Ricky Romero will get his second start of the season in the series finale Wednesday afternoon, facing Jon Lester in a battle of left-handers . . . Boston was 10-8 last year against the Blue Jays and came into Monday's contest 96-79 at Rogers Centre and 140-112 all-time in Toronto. The two teams will meet 18 times this season . . . Toronto and Boston rank second and third, respectively, in homers over the last three seasons with 652 and 626, respectively. New York is tops with 667.