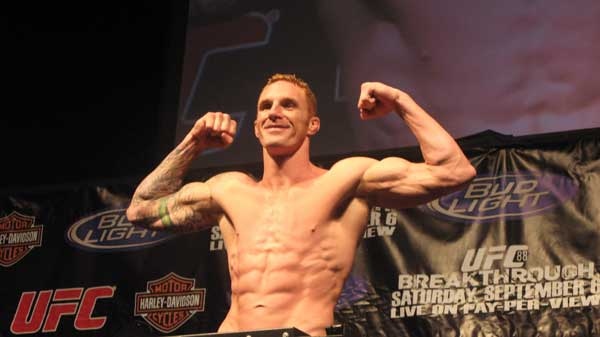 TORONTO - Jason (The Athlete) MacDonald will be bringing some hardware with him when he steps into the cage Saturday night at UFC 129.

The 35-year-old middleweight from Red Deer, Alta., has two steel plates and 10 screws in his left ankle courtesy of a gruesome accident last May at UFC 113 in Montreal.

Fighting John Salter, MacDonald's leg got caught as he was being taken down. He broke both the tibia and fibula and tore both ligaments off the bone.

To add insult to injury, the fight was ruled a loss.

MacDonald (25-14) looks to bounce back against American Ryan Jensen (16-6) before 55,000 at Toronto's Rogers Centre. The historic mixed martial arts show will be the culmination of a long, painful journey for the former Alberta prison guard.

"Initially the injury was horrible and the surgery and the months following the surgery were pretty rough," said MacDonald. "You feel a lot of pain.

"When you're laid up and not able to get around and not able to do things you're used to doing, you do a lot of soul-searching, you doubt yourself and you doubt if you can even recover. But as your body gets stronger, you become stronger mentally and you get healthy mentally again and you start to realize 'Hey I'm good."'

MacDonald knew something was seriously wrong with his leg the moment it happened. So did everyone else who saw it, including referee Dan Miragliotta who could be heard urging MacDonald to grab his hand and squeeze tight.

As doctors fussed around him in the cage, MacDonald declined a stretcher and made it to the back with the help of his cornermen. Only then did he accept the stretcher and a trip to hospital.

Surgery followed back home, as did a summer in plaster and on crutches.

"It was rough. But what's the old saying? What doesn't kill you, makes you stronger," said MacDonald, who is originally from New Glasgow, N.S. "I think I'm returning a stronger fighter and a stronger person because of it."

Not surprisingly, MacDonald has a history of being hard-nosed.

More than a decade ago, he needed more than 400 stitches after hitting a rock in a ski accident at Kimberley, B.C. And as a fighter, black eyes and stitches are a cost of doing business.

Still, he credits wife Kelly and others close to him for helping keep him focused after the leg injury.

"When I was doubting myself and hobbling around the house and feeling sorry for myself, my wife and my friends and family were a huge support system for me," he said. "They were telling me 'You can do this, you're strong, you're better than this, you can bounce back from this and you can do it (fight) again.'

"Without them, who knows what decision I would have made."

MacDonald gradually resumed training. It literally was baby steps at first and he had to pull the plug on a proposed fight with Rafael Natal in December at UFC 124 when he realized he had got ahead of himself.

"I was training two or three times a day and I was waking up in the morning barely able to walk to the washroom, so I had to just pull back on the training a little bit and ease up and get it a little bit stronger."

A month or two later, MacDonald was ready to turn up the training again.

He acknowledges his ankle will never be what it once was. But he says it doesn't present any problems physically -- or perhaps more importantly, mentally.

"I think that's the true test for if you've recovered from an injury," he said. "If someone's rolling over top of your ankle or someone's kicking at your leg and you're already in your head thinking 'That's my bad ankle, this is going to hurt,' then obviously it becomes an issue. But for me, I'm long past that. . . . I don't have the same range of motion that I had, the full range of motion that I had before the injury but it's as close to 100 per cent as it's going to be."

At six foot three, MacDonald is a big middleweight with prickly grappling skills. He has stumbled in the past when he fell in love with striking, forgetting what brought him to the big leagues.

He was cut after a loss to Nate Quarry at UFC 97 in April 2009, his third loss in his previous four UFC outings. MacDonald won three of his next four outside the UFC to earn an invitation back to UFC 113.

His return went nowhere according to plan. And MacDonald is realistic enough to know that any sympathy for his leg injury will disappear as soon as the cage door closes Saturday.

"For me this fight is huge. Let's be realistic. I'm coming off an injury and not just an injury, it was still considered a loss. So in my eyes, I'm fighting for my job."

To vary his camp and spar with some new faces, MacDonald spent six days at Xtreme Couture in Las Vegas.

For MacDonald, it was one more test before Toronto's final exam.

He expects the 33-year-old Jensen to come out like a hurricane.

"He's one heck of a fighter in the first round and he can give anybody the toughest first round they'll ever have. And he tends to fade in the second round. That's what I expect from him.

"I've prepared to have a rough and tough first round, much like my fight against Chris Leben. Possibly, hopefully I'll be able to catch him in the first round when he's being so aggressive and if I don't, definitely take the fight into the later rounds and I think it'll definitely sway into my favour."