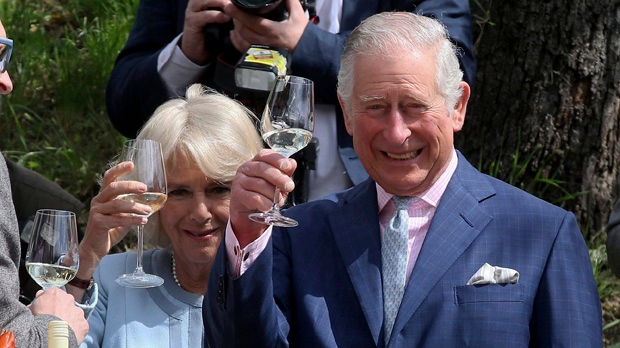 Camilla the Duchess of Cornwall and Britain's Prince Charles, from left, toast as they taste wines at a wine tavern in Vienna, Austria, Thursday, April 6, 2017. (AP Photo/Ronald Zak)

OTTAWA - The federal government has released a detailed itinerary for the upcoming royal visit by Prince Charles and his wife Camilla to Canada's north, eastern Ontario and the National Capital Region for Canada Day festivities.

The Prince of Wales and The Duchess of Cornwall will begin their brief tour on June 29 in Nunavut where they will meet with Iqaluit residents who are working to preserve and promote Inuit language and culture.

The royals will also discuss climate change in the region and take part in discussions on women's health before attending a community feast.

The following day, Charles and Camilla will meet with members of the Canadian Armed Forces at CFB Trenton in eastern Ontario and visit a farmers' market and winery in the area.

Then, on Canada Day, July 1, the royals will open the Canadian History Hall at the Canadian Museum of History before taking part in the celebrations to mark Canada's 150th birthday.

Prince Charles will then open the newly-renovated National Arts Centre and visit Ottawa-based e-commerce company Shopify before he and Camilla wrap up their tour by unveiling of The Queen's Entrance at Rideau Hall -- new front doors that symbolize 150 years of Canadian history.

This will be the 18th visit to Canada for the Prince of Wales, and the fourth for the Duchess of Cornwall.