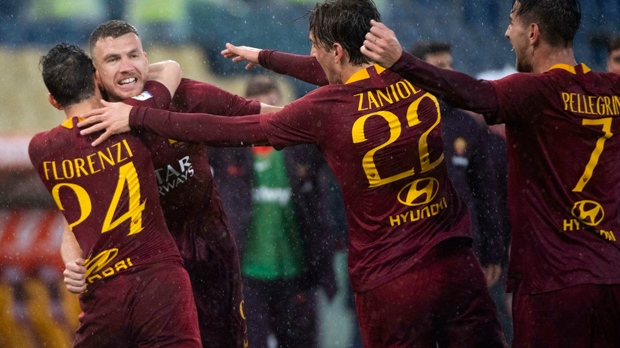 Roma's Edin Dzeko, left, celebrates afters scoring during the Serie a soccer match between Roma and Udinese at the Olympic Stadium in Rome, Saturday, April 13, 2019. (Claudio Peri/ANSA via AP)

From the Toronto Raptors to Serena Williams, the victims of the sports curse that seems to follow unlucky sports fan Drake are numerous.

Now one famous Italian soccer club is taking precautions to ensure its players avoid hanging around with the star Canadian rapper as it makes a push for a spot in next season's UEFA Champions League.

"All Roma players banned from taking photos with Drake until the end of the season," club AS Roma posted on its English Twitter feed.

While the social media post was most likely done in jest, Drake does have a reputation of giving bad mojo to top athletes.

He is the "global ambassador" for the Toronto Raptors, and has been courtside for some of the NBA club's blush-inducing playoff defeats. He was in attendance at the 2015 U.S. Open to watch tennis Serena Williams, who proceeded to lose to heavy underdog Roberta Vinci. He posed for a picture with Conor McGregor before the Irish MMA fighter was pasted by Khabib Nurmagomedov in the main event of UFC 229.

Twitter is rife with examples of soccer players posing for a picture with the four-time Grammy Award winner, only to have their teams go on to suffer crushing defeats.

Contrary to what AS Roma may believe, however, fraternizing with Drizzy is not necessarily a kiss of death.

Drake was widely present during the Kentucky Wildcats' run to the 2012 NCAA men's basketball title to the point that he received an honorary championship ring.