'It's like the fight club that everybody talks about’:Toronto man takes aim at World Axe Throwing Championship

TORONTO -- Nine axe throwers from across the country have qualified for the World Axe Throwing Championship happening this Sunday, including two people from Toronto.

For Jon Miller, his interest in axe throwing started at a birthday party. From his very first toss, he said he was hooked.

"There was just something about that meaty thud of an axe sticking to the board," Miller told CTV News Toronto. "And then you hit a bullseye- and that was about it."

Five years later, Miller is one of nine Canadians who have qualified to compete in the World Axe Throwing Championships in Tucson, Arizona.

A $15,000 USD prize is on the line at the internationally televised event.

For Miller, he said his technique comes down to just "getting a feel for the axe and where you’re going to put it."

He said that he has practiced thousands of throws, honing his techniques and working with coaches and friends in order to qualify for the championships. 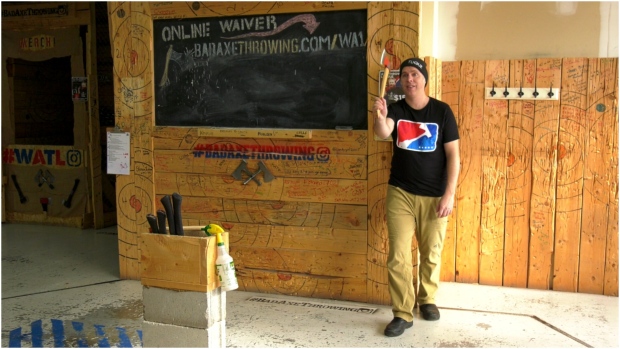 Standing 12 feet from the target, competitors get 10 throws per match, five each on two different target boards. A bullseye is worth six points. If the axe lands in the ring next to the bullseye, it’s worth four points, and the points decrease the further the axe lands from the centre. On the 5th and 10th throws, competitors pick and then aim for a smaller dot off-centre, known as the "killshot". Landing the axe across that dot earns them eight points. A perfect score is 64 points.

When asked what it is that keeps him hooked on a sport that many people play just to unwind with friends, Miller compares axe-throwing to golf.

"You take a look at golf, no one’s going to score an 18, but they keep going. It’s just the strive to throw better and more consistent."

Along with Miller and Phillipe LaChance, of Toronto, qualifiers for the championship include throwers from Halifax, Waterloo, St. Johns, Calgary, and Sarnia. Sixty-four throwers in total will compete for the cash prize.

For the throwers, it means going elbow-to-elbow with some of the best in the world.

"Ultimately you’re throwing against yourself, but you can’t help but notice they might be having more success than you," Miller added.

Miller admits that while the competition is tough, the camaraderie is also very strong among players, who often give each other tips during league play to improve their games.

While Miller may have sharpened his sights on winning the championship, he says he would be happy if one of his "Canadian friends" took home the prize.

"That’s worth it alone. Actually, the friends are worth it, and the money is a very close second."