TORONTO -- A Toronto woman said she feels uncomfortable after her neighbours installed a deck that faces directly into her High Park apartment.

“I noticed the platform a year ago but it didn’t seem like it was something that was going to be in use,” MJ Crawford said, speaking to CTV News Toronto.

A year later, Crawford said that the deck is very much in use and is now affecting the way she lives.

“I like for the light to come in through the window, so I’ll open my blinds, forget there’s a deck there and I’ll look up and I’ll see some guys looking at me,” Crawford said, adding that she had been caught by the construction workers several times at various stages of undress.

“There’s not a ton of activity there unless it’s the contractors,” Crawford said, referring to the ongoing renovations at the property near High Park Boulevard and Indian Road.

Instead, Crawford said she reached out to the city for help Wednesday morning.

“They gave me a building permit number and after the ninth time I called I finally got through and gave them the address and they said they would look into it,” Crawford said, adding that the city did not provide her with a reference number.

Crawford said she hasn’t heard back from the city about the issue and the contractors are still frequenting the space.

“It’s not a temporary platform as I once thought, it’s become more of a permanent deck,” Crawford said.

CTV News Toronto reached out to the city for comment who confirmed they are looking into matter. 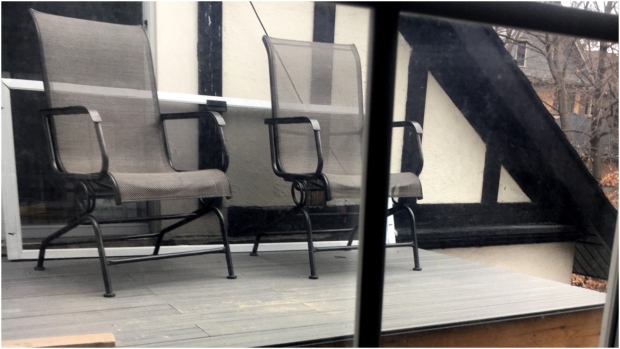 The photo was first posted to Reddit and has already garnered thousands of comments, many of which include serious, and some comical, suggestions on how to get the neighbours to remove the deck.

“Every time they're out there, sit in your window and watch them with binoculars. Bring popcorn and a flask of coffee,” one user writes.

“Get a mannequin and have it stare out the window at random times. Move it around. Not every day,” writes another user.

Crawford said she’s tried to find some humour in her predicament, but admits that the situation is "definitely creepy".

“Definitely time to upgrade the blinds,” she said on Reddit.