TORONTO -- With so much time now spent out of school and away from their dance classes, Newmarket sisters Erin and Tara McCabe were looking for a way to put their artistic skills to use.

“I would say that we’re very like artsy people,” Tara told CTV News Toronto. “My sister said, ‘Well why don’t we paint rocks and start a challenge and give them to people?’”

From there, the “URock Challenge” was crafted. Their mission: to bring the community together with a “paint-it-forward” project.

“So we painted the rocks, and we had quite a few, so we left the rock on someone’s doorstep with a piece of paper,” Erin said. “And it says to take the rock and place it in their garden and find a new rock and paint it or write a message on it and then they would take that rock they finished painting or writing on it and take that piece of paper and drop it off at someone else’s doorstep for them to start the challenge.” 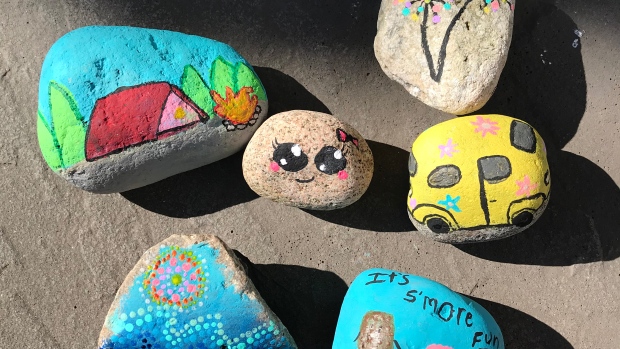 The McCabe sisters first started seeing colourful rocks pop up on their street, and then noticed the challenge growing around the neighbourhood, thanks to word of mouth and social media.

“Lots of parents have emailed us or sent us a message on Facebook saying their kids enjoyed painting rocks, and they said it was a great idea,” Erin said.

“And lots of people have been sending us pictures of their rocks, which makes us really happy when we see people are participating in our challenge,” Tara added. “Even though we can’t be together, we’re still connected through all of the rocks and being part of this challenge together.”

Ten-year-old Kiana and six-year-old Lani were two of the community kids who participated in the “URock Challenge.” 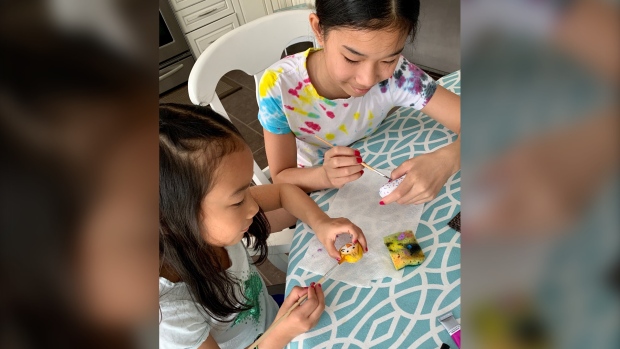 “I had fun painting the rocks because I like colouring and drawing,” Lani said.

“It’s a fun way for you to get everybody in the whole neighbourhood to participate, and it’s like you can still be together – but not,” Kiana agreed.

For Erin and Tara, painting rocks acts as a stress reliever.

“It’s kind of relaxing, almost like a different form of meditation,” Tara said. “Really takes your mind off this whole stressful time.”

And Erin added that finding the rocks is as much fun as painting them.

“It just brightens someone’s day,” she said. “We’ve had our neighbours comment and say that they see rocks on their walks and just how beautiful it is. It’s like a kid going on an Easter egg hunt. It’s finding something.”