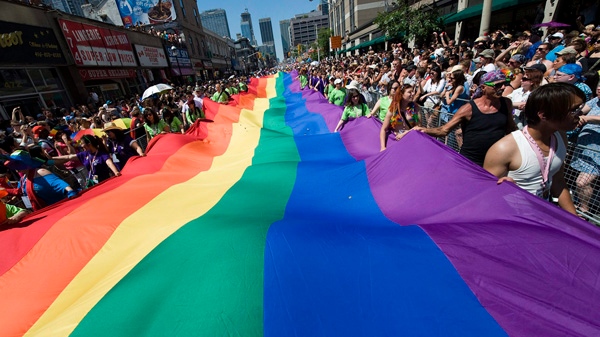 The city's anti-discrimination policy was not broken when Pride parade organizers allowed a group declaring its opposition to "Israeli Apartheid" to march in last year's parade, city officials said on Wednesday.

In a report to the Toronto council's executive committee, city manager Joe Pennachetti said a group called Queers Against Israeli Apartheid (QuAIA) was not promoting hatred or discrimination by waving banners using the term "Israeli Apartheid" as it marched through Toronto's downtown last summer.

The decision could spare Toronto's Pride parade from losing $123,000 in grants from the city, after organizers Pride Toronto were put on notice for letting the group participate.

Pennachetti said in his report to the executive committee that the term "Israeli Apartheid" violates neither the Criminal Code nor the Human Rights Code of Ontario.

"The City Staff has therefore concluded that the participation of QuAIA in the Pride Parade based solely on the phrase ‘Israeli Apartheid' does not violate the City's Anti-Discrimination Policy," reads Pennachetti's report.

The decision also means that banners carried by the group did not promote hatred or seek to incite discrimination, he said.

The Canadian Jewish Congress disagreed with the city manager's decision, saying that the group promotes hate against the Jewish State of Israel.

"The very definition of discrimination is when you treat one group of people differently from another based on their ethnicity, religion or country of origin. QuAIA are attempting to do just that," CEO Bernie Farber said in a statement.

Toronto City Coun. James Pasternak said he is also shocked and dismayed by the report.

Pasternak said the QuAIA "is using the suffering under the old apartheid regime in South Africa to demonize the state of Israel and its supporters. This shameful discourse, born out of ignorance and fuelled by intolerance, has caused great pain in many communities and has tarnished Toronto's reputation.

Pasternak said Toronto's responsibility is to fight intolerance, therefore the QuAIA should not be allowed to participate in a city-funded event.

"This might also require a very serious look at how the City's Anti-Discrimination Policy is drafted. If it cannot stop this kind of discrimination, then it needs to be tightened up," he said.

Last year's parade was marked with controversy when organizers banned, and then reversed the decision, to allow the group to march.

Shortly after, city council decided to withhold future grants to parade organizers unless it ensured all participates complied with the city's anti-discrimination policies.

Pride Toronto established a process for resolving such conflicts after last year's decision, including a panel to review applications.

That panel has not yet ruled on whether QuAIA will participate in this summer's march.

Coun. Doug Ford threatened on Wednesday to pull future funding if QuAIA marches in the parade on July 3.